In a week packed with earnings reports from some of the most valuable public companies, the latest figures from Apple (NASDAQ:) are crucial for insights into a variety of topics affecting the market, such as consumer demand, retail chains, supply, the effect of the rising US dollar and higher interest rates.

The iPhone maker, which has the largest weight in the S&P 500, is Thursday, October 27, after the market close.

According to analyst consensus estimates compiled by Investing.com, the company’s sales for the quarter ended September 30 are expected to have expanded 6% to $88.76 billion compared to the same period last year. previous. Earnings per share is expected to be broadly flat at $1.27.

Apple warned earlier this year that the second half of this year could prove difficult due to supply chain bottlenecks and weakening demand from China and Europe. But these headwinds have, so far, not caused as much damage as previously anticipated. 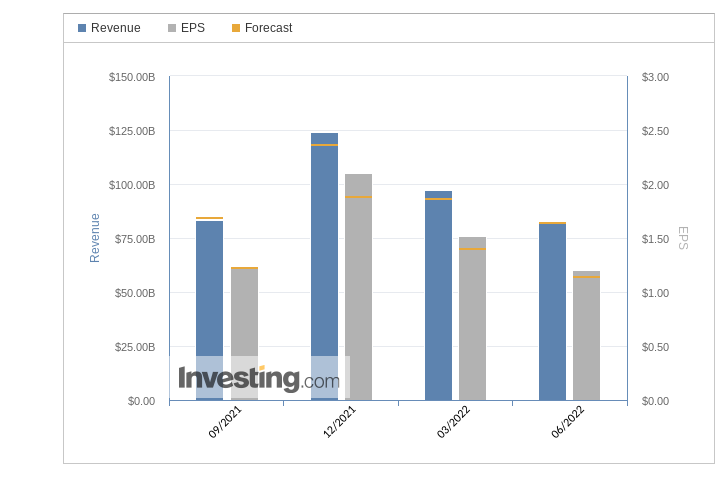 This year, Apple introduced the iPhone 14, the new AirPods Pro headphones, and the new Apple Watch models. The latest pre-order data showed that the iPhone 14 Pro Max was the best-selling model, outperforming what the previous version did in a similar period of time.

Due to the strength of Apple’s products, the analyst community is generally optimistic about Apple’s growth prospects. According to InvestingPro data, there has only been a 4% downward revision to the company’s EPS estimates over the last 90 days. 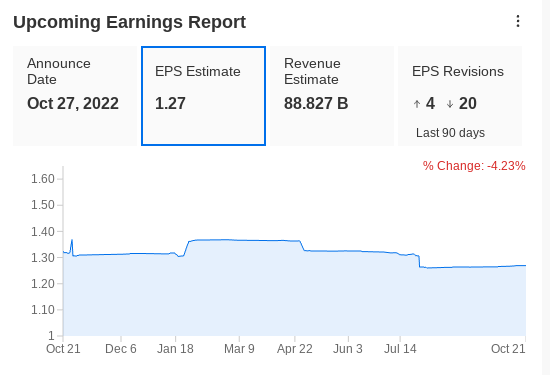 The main driver of this optimism is Apple’s wealthy and loyal consumer base, in theory more resilient to macroeconomic headwinds. During the previous quarter, Apple’s iPhone and iPad performed better than feared, while other products, including Macs and wearable devices, fell short of analyst projections. Services, a key growth area for Apple, also showed some weakness.

Still, there are some signs that tough current conditions are hampering the growth of Apple’s flagship iPhones. The company is backing away from plans to ramp up production of its new iPhones this year after an anticipated surge in demand failed to materialize, according to Bloomberg. reported last month.

“The Cupertino, California-based electronics maker has told suppliers to pull back from efforts to increase assembly of the iPhone 14 family of products by up to 6 million units in the second half of this year.” said the report citing sources.

Global demand for personal electronics has also been dampened by rising inflation, recession fears and a halt to the war in Ukraine. The smartphone market is expected to shrink 6.5% this year to 1.27 billion units, according to data of the IDC market tracker.

Apple’s earnings may show some slowdown in demand when it’s reported later this week. But the market is not expecting any major negative surprises.

Divulgation: At the time of writing this article, the author was long in Apple stock. The views expressed in this article are solely the opinion of the author and should not be taken as investment advice.

Today’s market makes it more difficult than ever to make the right decisions. Think about the challenges:

To handle it, you need good data, effective tools to classify the data, and insights into what it all means. You need to take the emotion out of investing and focus on the fundamentals.

That’s what InvestingPro+ is for, with all the data and professional tools you need to make better investment decisions. Learn more “