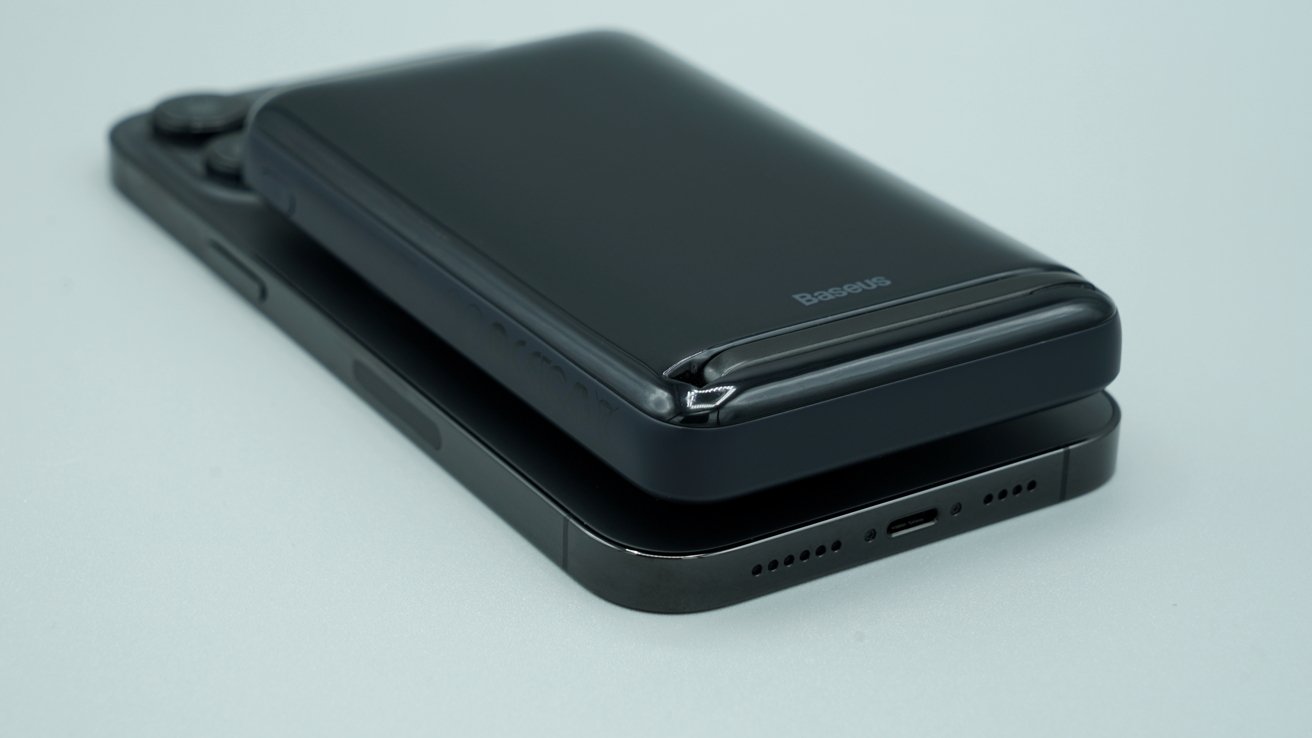 it’s not a secret that we are fans from Apple MagSafe battery pack, making it even more difficult to find suitable alternatives. However, Baseus has a great offering that packs desirable features into a not-too-big battery.

We use a handful of metrics to determine if a MagSafe The battery pack is worth considering: size, weight, charging potential, and unique feature set. For example, Apple’s battery pack sits in the middle, offering good enough capacity for its size with a minimalist design.

The Baseus Magnetic Power Bank has a 10,000mAh capacity with a 20W USB-C PD port. It has a small hidden kickstand at the base and an LED display.

It’s made of plastic and rubber materials that attract fingerprints and skin oils, yet it’s easy to clean. The magnets protrude from the bottom with a slightly raised lip and have a sticky surface.

Although the battery pack is not technically “MagSafe”, it does cause the MagSafe charging animation to occur when connected. Charges an iPhone at 7.5W when using wireless charging mode.

The iPhone sees the battery as a standard wireless charger, so battery level information is not available in the operating system. Instead, the display on the back of the battery pack provides a charge indicator and battery level.

Battery power is supplied via USB-C up to 18W when connected to power. A USB-C to USB-C cable is included in the box for charging.

The USB-C port is also capable of charging connected devices up to 20W with Power Delivery. This is the fastest way to take advantage of the 10,000 mAh capacity of the battery, but it requires a cable.

It is also possible to charge using the wireless charging pad and the USB port simultaneously. We tried this by loading AirPods Pro via a cable while the iPhone was on the charging pad. This will chemically drain the battery faster due to the higher current draw than a single device plus the additional heat generated, so we recommend only charging one device at a time.

Baseus says the battery will charge a iPhone 14 ProMax about 1.8 times. This compares to the 40% battery life provided by Apple’s MagSafe Battery Pack.

This large capacity and number of charges is due to the size of the battery. It’s not too big, though it’s just shy of the unwieldy threshold.

The magnets are flush with the top of the battery pack, meaning the pack will sit a comfortable distance from the camera bump on any iPhone model. However, that means there will be excess hanging under the iPhone when used in the upright position.

The battery pack is also on the heavier side. It weighs 9.6 ounces, which is heavier than the iPhone 14 Pro Max at 7.27 ounces. Apple’s battery pack weighs 4.06 ounces for comparison.

Use of Baseus magnetic power bank

As an iPhone 14 Pro Max user, Baseus magnetic power bank is perfect. Since the iPhone is slightly wider, it means we can comfortably grip it with the battery in the palm of our hand. However, it does more than double the weight in the hand.

Size and weight aren’t much of an issue as we’re not likely to use the phone while it’s attached to this battery pack. It has features focused on keeping the battery on a table while charging, which makes sense given its size and weight.

That means the Baseus Magnetic Power Bank falls into a different use case compared to Apple’s MagSafe Battery Pack. We tend to keep the Apple bundle connected even when using the iPhone or carrying it instead of using the Baseus bundle when sitting idle on a table.

This is not a criticism of the battery pack itself. The larger size is a result of the feature set and capacity, so it is expected to serve a slightly different use case.

The kickstand is small, out of the way, and easy to open and close. Rotates to a fully open position to hold the battery pack in a vertical or horizontal orientation.

While the kickstand works in a horizontal position, it offers a much better view in a vertical position. The iPhone can be rotated independently of the battery, which means the iPhone can display elevated video at a better viewing angle.

Both orientation and position feel secure. A knock on the table or the devices will not make them fall easily.

This is where the usefulness of the Baseus Magnetic Power Bank comes into play. Sit at a table, plug in your iPhone, and play a video while it charges.

This simple feature makes it worth keeping the entire battery pack in a bag while traveling or on the go. We wouldn’t find much use for the pack when we’re out hiking, but idling in an airport, at a restaurant, or just spending a few extra hours at an app-focused amusement park are perfect use cases.

Think extra hours, not extra days, of use.

There is also the option to connect a cable for faster and more efficient charging while taking advantage of the magnetic mount. Or, connect another device to charge both at the same time, but we already talked about that.

Anyone looking for a great travel battery should consider the Baseus Magnetic Power Bank. It won’t fit every use case, but it doesn’t have to.

Current owners of Apple’s MagSafe Battery Pack will find a lot of use in the Baseus pack. Covers use cases not addressed by Apple while offering increased charging capacity.

This is a big battery pack, but it’s not too big. However, we recommend buying it for use on a table, as that’s where its feature set thrives.

This is a useful battery pack that does its job well. It offers a magnetic pack on a kickstand providing many tabletop use cases.

However, its size makes it less useful as a carry-on backpack. A slightly smaller future model could go a long way toward addressing our concerns.

Where to buy the Baseus magnetic Power Bank

Get Baseus Magnetic Power Bank for $59.99 on Amazon. For a limited time, apply the coupon on the page for a 15% discount.