Samsung started updating the Galaxy S22 series today with Android 13 and One UI 5.0. It took a few months of beta testing, but the wait is finally over. U.S Galaxy S22 series users can leave this beta chapter behind now and finally focus on the present and all things A 5.0 user interface have in store. Speaking of which, if you’re a Samsung DeX user, you will probably love One UI 5.0!

As some of you may know, I have been using Samsung DeX as a desktop replacement since I got the Galaxy S22+ in March. Until today, it has been a difficult journey. dex in the Galaxy S22+ (exynos) felt pretty poorly optimizedSo much so that, for a while, I preferred to use my Galaxy Tab S7 FE (Snapdragon 750G 5G) connected to my third-party DeX hub instead of the Galaxy S22+. I am happy to report that android 13 and One UI 5.0 finally addressed performance issues in DeX. If you’re curious to learn more, here are my first impressions of DeX in One UI 5.0.

Samsung DeX is lightning fast on the Galaxy S22+ running Android 13 and One UI 5.0!

The first thing I noticed once I launched Samsung DeX on my Galaxy S22+ running One UI 5.0 was an incredible sense of performance. Assuming you’ve tried DeX on the Galaxy S22+ (Exynos 2200) before the One UI 5.0 update, you’ll notice how much more responsive DeX has become through this new firmware release.

Opening apps and loading web pages is a breeze, and the stutters have apparently disappeared; plus, the mouse cursor is much more responsive, whether you’re loading something in DeX or not. To give you a rough estimate of how much better DeX is in One UI 5.0: Opening ~25 Chrome tabs at once used to take around 10 seconds in DeX in One UI 4.1. Now it only takes about 2 seconds, which is an incredible improvement. (This is a approximate calculation).

To top it off, my Galaxy S22+ seems to run DeX without getting as hot, although I can’t be sure about this without spending more time in DeX. Everything feels better streamlined, though, and I wouldn’t be surprised if Samsung is better managing thermals in DeX with the release of Android 13 and One UI 5.0.

If you’ve tried DeXing on the Exynos-powered Galaxy S22 before and have a clear memory of how it worked, try running DeX again on One UI 5.0. You will surely notice an increase in performance.

Samsung DeX UI has seen some changes in One UI 5.0. Some or good, others not so much

A quick reminder: this is a first look at Samsung DeX in One UI 5.0, so my experience at the time of writing is relatively limited. But for what it’s worth, I’ve noticed some UI changes after the Android 13 update that you may or may not like.

Samsung made some minor changes to the DeX taskbar in One UI 5.0. For starters, the notification icon has a different shape. But more importantly, the “Clear” button in the notification window has been relocated from bottom to top, which doesn’t make much practical sense. It’s further away, so you’ll have to move your mouse cursor further before clearing all notifications. In short, you may have to retrain your muscle memory.

Also, it appears that the “minimize all” quick button that was previously in the bottom right corner of the taskbar has been removed. The Start button in the lower left area of ​​the taskbar does the same thing, but again, you’ll have to retrain your muscle memory if you’re coming from One UI 4.1/4.1.1/Windows 10/11.

On a more positive note, clicking the date and time area on the taskbar now reveals a small calendar in a popup instead of launching the Calendar app. It seems to be a much more convenient way to display the calendar to DeX users, and I approve. 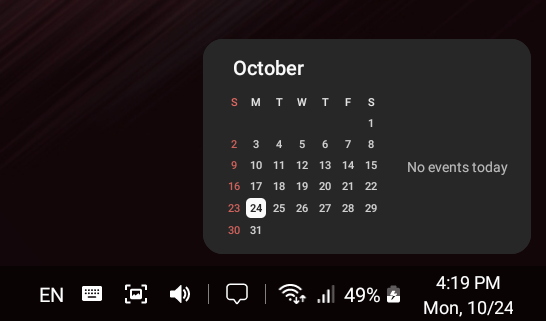 In conclusion, and on a first impression, it doesn’t look like the Samsung DeX UI has changed too much with Android 13. Some minor UI differences may bother some users, but if that means we get East performance level, I’m for it! One UI 5.0 pleasantly surprised me as a DeX user, and I have to congratulate it. Samsung for finally addressing persistent performance issues.