2022 has gone from bad to worse for semiconductor stocks, and that has caused real problems for other markets.

Looking ahead to October, shares of semiconductor companies, whose chips are used in everything from computers to cars, were already posting big losses for the year on growing fears of a recession. That came after two difficult years when the pandemic, coupled with a fire at a major chip factory, crippled production.

Then, on October 7, the The US Department of Commerce announced strict restrictions in the sale of semiconductors and equipment to China. The restrictions could cost hundreds of millions to billions of dollars in revenue for several semiconductor companies that investors already expected to face in the coming years.

The damage to stocks in the sector has been significant. As of October 20, the SPDR S&P Semiconductor ETF (XSD) has fallen by 38.97% in 2022, after having extended the losses after the news of the export restrictions.

Market leader Nvidia (NVDA) fell 7.13% since the restrictions were announced, and is down 58.51% for the year. The restrictions could impact as much as $400 million in potential revenue from China in the company’s third quarter, says Morningstar tech sector strategist Abhinav Davuluri. More details may be revealed when the company reports earnings on November 16. We wrote about Nvidia last month for our technology week.

Advanced Micro Devices (amd) was hit even harder, falling 14.86% since October 7. The firm also released preliminary results for its third quarter with revenue of $5.6 billion, down from the original guidance of $6.7 billion. The company cited weak PC sales as one of the main reasons for the lower revenue. The full results will be published on November 1. Advanced Micro Devices is down 59.85% for the year.

Companies that produce the technology used to make semiconductors have also been hurt, including Lam Research (LRCX) and Applied Materials (AMAT), which are down more than 10% since the export restrictions were announced, and down almost 50% so far this year.

Both companies recently disclosed details about potential losses due to China’s restrictions. Applied Materials now expects revenue to decline by about $400 million during its fiscal fourth quarter, with those results due Nov. 17.

When Lam Research released fiscal first-quarter results on Oct. 19, the company lowered its 2023 forecast for total spending on equipment used for wafer fabrication, a process to develop semiconductors, in part because of the restrictions. “Specifically, the negative revenue impact of the restrictions is expected to be in the range of $2 billion to $2.5 billion,” says Davuluri.

Taiwan Semiconductor Manufacturing (SST), the world’s largest semiconductor foundry, fell 14.49% after the restrictions. Although only 10.4% of its revenue comes from China, investors sold the shares due to concerns that lower sales to the country by Taiwan Semiconductor’s customers could affect the manufacturer’s order volumes.

Punitive losses in semiconductor stocks have had a big impact on the tech sector this year and have also been a measurable drag on the broader market. Semiconductor stocks account for 23.30% of the Morningstar US Technology Index, with the largest share represented by the index weighting in Nvidia and Intel (INTC). As of October 20, the industry contributed 10.89 percentage points to the sector’s 33.27% drop this year.

Morningstar’s US Market Index has a 5.31% weight in semiconductor stocks, but the group contributed 2.66 percentage points to the 23.24% drop year-to-date in the index. 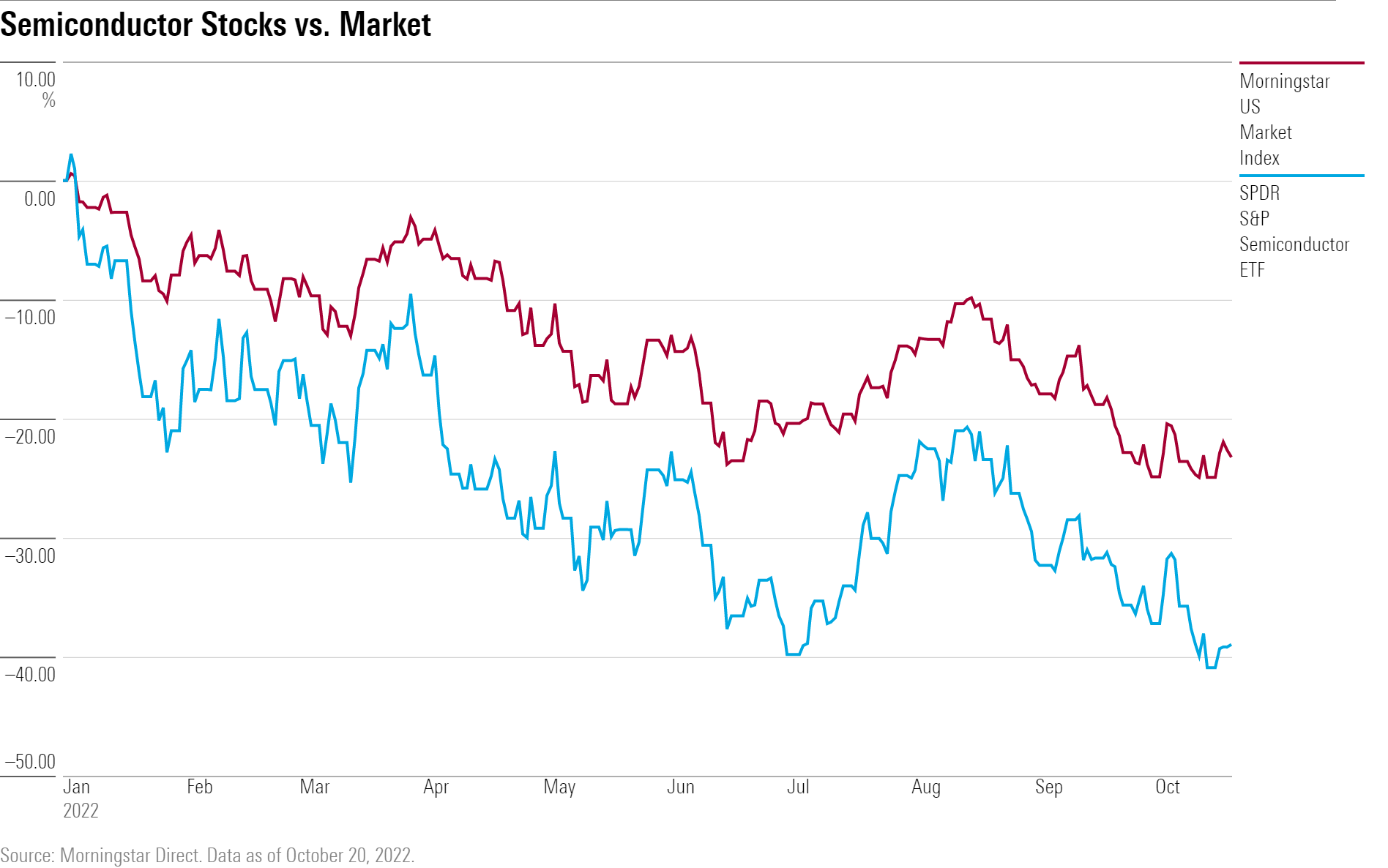 US restrictions may hurt revenue

While a recession would reduce demand for semiconductors, it is the US action against China that is now in the focus of investors’ attention.

The first is the limits around which chips can be sold. “There is a threshold for performance,” says Davuluri, where the sale of powerful chips to China, namely those used in data centers and artificial intelligence, would be restricted. “The second part is on the equipment side, which is to prevent China from making their own replacements or substitutes for chips that are banned.” 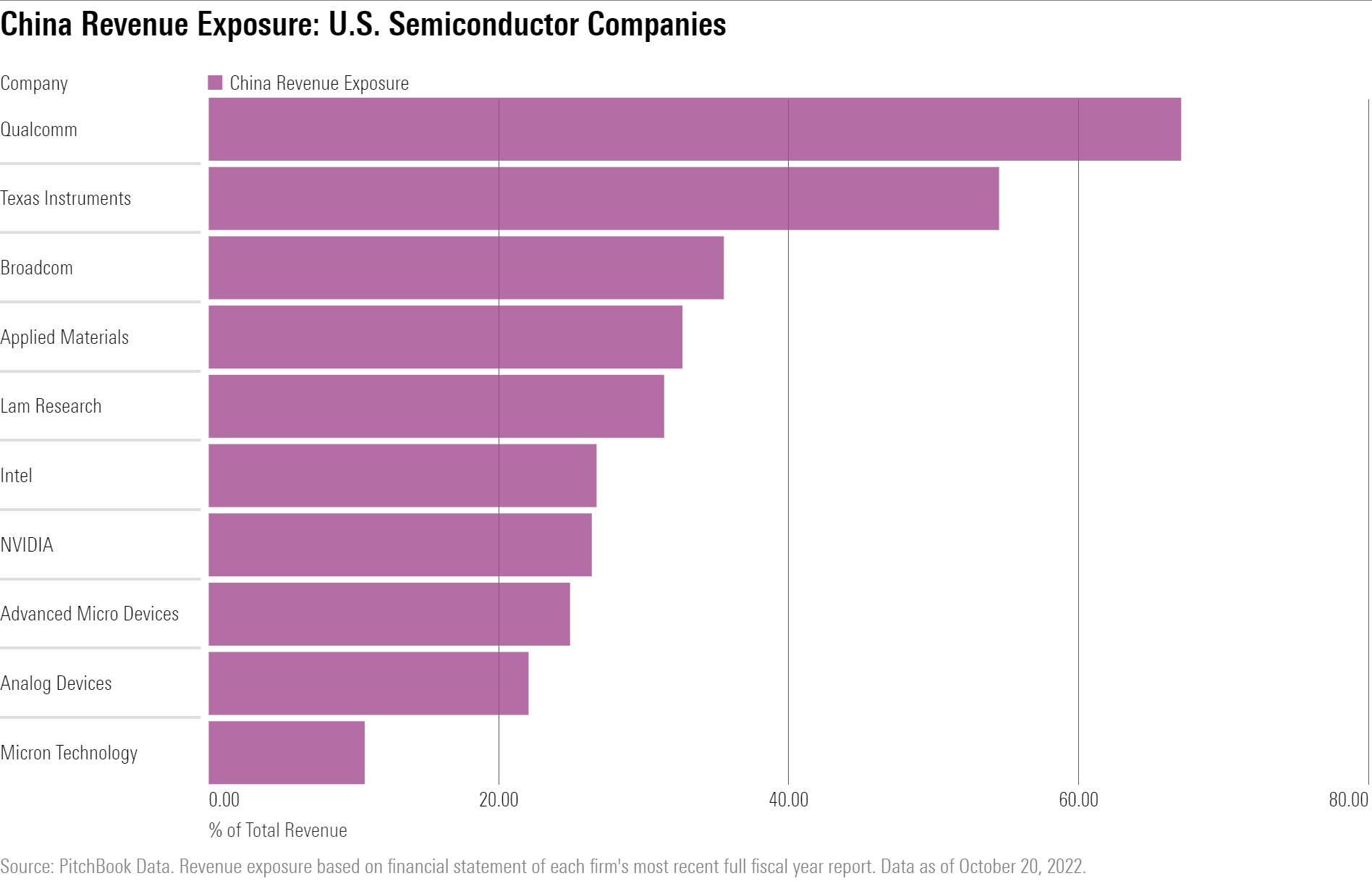 Not all businesses will be affected by the new restrictions to the same extent.

Although Qualcomm (QCOM) has a 67% revenue exposure to China, the company produces chips used in smartphones, which is below the performance threshold included in the restrictions on sales to China.

However, Davuluri points out that Qualcomm is not completely immune from the restrictions. “Chinese Smartphone OEMs [original equipment manufacturers] may seek to limit its use of Qualcomm chips and use of alternatives outside the US in the future, such as Taiwan-based MediaTek (MDTKF).”

For companies like Nvidia and AMD, which have around 26% revenue exposure to China, the impact will be more profound. The ban would apply to graphics processing units (GPUs) used in data centers, which tend to be more lucrative.

Not all China revenue would be wiped out for Nvidia and AMD. The sale of consumer GPU and central processing unit (CPU) products would likely continue.

“I don’t think AMD or Nvidia will stop selling chips for consoles or PCs,” says Davuluri. The risk to that market will be that China could fight for semiconductor independence, and it could look like a China-based player is taking a bite out of the remaining demand that AMD and Nvidia could legally serve. However, there is a “high barrier to entry” to the GPU market, and that risk could take years to manifest, says Davuluri.

The revenue impact for the data center semiconductor business segments is also a bit more nuanced. Davuluri points out that there could still be room to sell to China. “Nvidia has talked about being able to sell some chips, like previous generations, that are not above the [performance] threshold,” he says. While China’s revenue loss would be slightly cushioned in that case, it would only be temporary.

“Ultimately, as performance continues to improve and expand, they will need the latest and greatest at some point. That will force them to try to develop their own local solutions,” says Davuluri.

The short-term outlook is bleak

While the US Department of Commerce restrictions have been primarily responsible for depressing investor sentiment around semiconductor stocks over the past two weeks, they have only compounded concerns about the industry that have existed for the past two weeks. last months.

Fears of a global recession and weaker consumer habits have prompted companies to cut spending on innovative semiconductor products in several markets.

High demand for personal computers during the pandemic in 2020 and 2021 led manufacturers to place large orders with foundries to produce more chips. However, that demand fell in 2022.

“A lot of people who would have upgraded, have already upgraded, whether it’s from a consumer standpoint or from a business standpoint, so [demand] it was due to a significant slowdown,” says Davuluri. However, since orders placed by chipmakers could not be cancelled, the PC market is now oversaturated with semiconductors.

But it’s more than falling demand for PCs that’s depressing the semiconductor market. While 2020 and 2021 were strong years for semiconductor companies due to the demand for PCs, a large part of the growth in the industry in the last decade has been driven by smartphones.

“Smartphones are actually the biggest market for chips right now, and that’s seen a lot of weakness,” says Davuluri.

As shown with the recent iPhone 14, smartphone manufacturers have focused on improving their models incrementally this year, compared to the more advanced updates that happened in 2020 and 2021. That led to less demand for innovative solutions. of semiconductors for smartphones. Concerns about falling consumer spending in the event of a potential recession would cap growth in the smartphone semiconductor market.

Semiconductor demand for enterprise and data center solutions has held up slightly better compared to more consumer-oriented markets such as PCs and smartphones, according to Davuluri. But he expects that to slow down in 2023 as well. “That’s a function of softer, more conservative spending in a potential recessionary environment,” he says.

Davuluri forecasts that the semiconductor industry will perform weakly overall in 2023, with certain markets remaining difficult due to supply shortages, such as automotive and industrial semiconductors. However, the uncertainty is in how long that weakness would last.

While the near-term outlook for semiconductors is relatively uncertain, Davuluri sees the semiconductor market growing to around $1 trillion in total sales by the end of the decade, from around $620 billion this year.

“That growth expectation remains intact, but that doesn’t mean we won’t have cycles and recessions, and that’s what’s shaping up for 2023.” 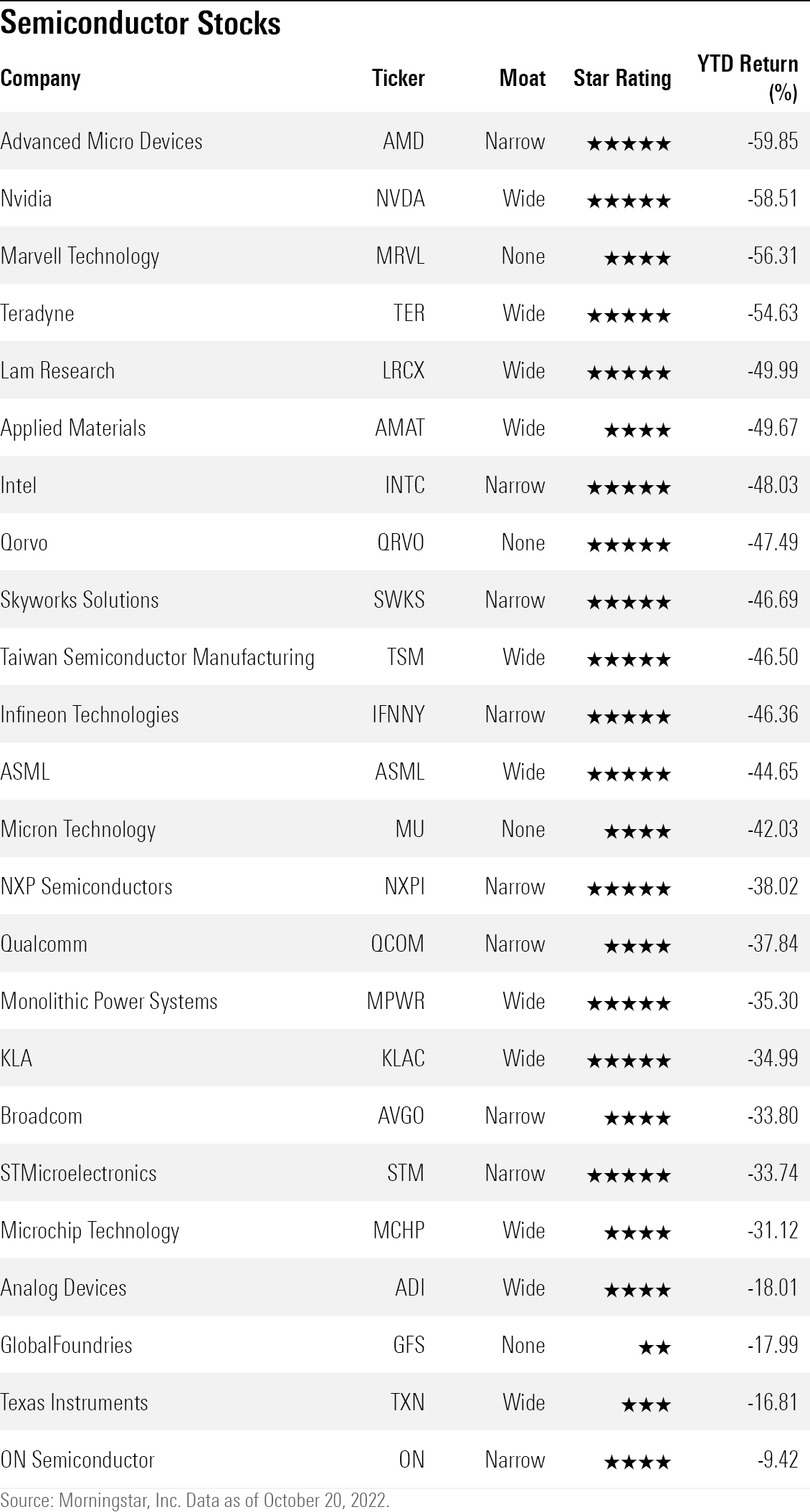