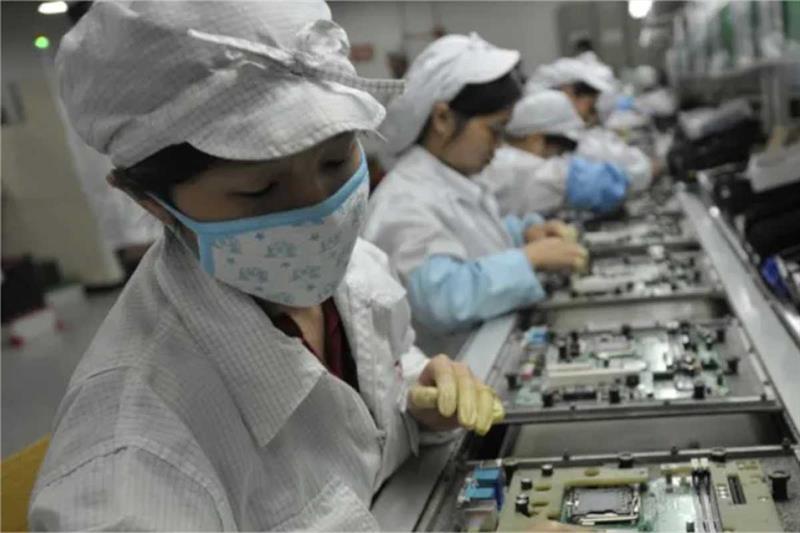 All people except covid prevention volunteers and essential workers “should not leave their residences except for covid testing and emergency medical treatment,” said officials at the Zhengzhou Airport Economic Zone, downtown. from China.

The move comes after images emerged on Chinese social media last week showing people leaving the facility, which is run by Taiwanese tech giant Foxconn and makes products for Apple.

Employees complained online about poor conditions, a lack of supplies and having to flee the factory on foot to avoid Covid transportation curbs. Foxconn says there are currently more than 200,000 workers at its Zhengzhou plant.

“Getting paid is no longer important, the most important thing is to survive,” a 30-year-old man who worked at Foxconn told AFP, saying he was staying at the factory because he was afraid of escalating an outbreak in his hometown.

“The anti-virus measures on campus are chaotic, virus-negative people live together with virus-positive people,” said the worker, who asked to remain anonymous.

He said the food provided to employees “wasn’t filling” and complained about a lack of medicine for sick colleagues.

China is the last major economy committed to a zero-Covid strategy, persisting with rapid lockdowns, mass testing and lengthy quarantines in a bid to quell emerging outbreaks.

But the new variants have tested the ability of local officials to shut down outbreaks faster than they can spread, leaving much of the country living under an ever-changing patchwork of Covid restrictions.

The Zhengzhou city district said on Wednesday that all businesses will be required to work from home, with only “key businesses” allowed to continue operating. He did not specify which companies fell into that category.

Only medical vehicles and those delivering essential items are allowed on the streets.

The district’s more than 600,000 residents will have to take nucleic acid tests every day, the local government said, warning that it will “resolutely crack down on all kinds of violations.”

The Communist Party-run Dahe Daily said on Wednesday that local authorities would “thoroughly disinfect” Foxconn facilities, including employee dormitories, over the next three days. Quarantined workers at the factory would have to show seven days of negative tests before leaving for their hometowns.

The newspaper also said the government had promised to provide timely meals and set up an advice hotline for workers.

Foxconn told AFP on Wednesday that its Zhengzhou park “maintains a closed-loop operation,” without giving details.

The company said over the weekend that it was screening employees daily and offering rides to those who wanted to leave, after videos on social media showed employees walking down highways with their suitcases.

Footage shared with AFP by a Foxconn employee showed a large group of workers pushing their suitcases down an empty highway Tuesday afternoon, toward a line of people in hazmat suits.

Apple did not immediately respond to an AFP request for comment.

Local governments in the area surrounding the city of Zhengzhou have asked Foxconn workers to register with authorities if they return home and to complete several days of quarantine upon arrival.

The company also said Tuesday that it would quadruple bonuses for employees willing to stay at the factory during the outbreak.

Chinese social media users on Wednesday accused Zhengzhou authorities of “performatively” lifting Covid restrictions after the city announced a day earlier that it would “restore normal production and life.”

“In the morning you lift the lock, then at night you lock again, what are you trying to do?” Weibo user Taodixing asked.

China reported more than 2,000 new domestic infections on Wednesday for the third day in a row.

Henan province, where Zhengzhou is located, officially reported 359 Covid-19 infections on Wednesday, up from 104 on Tuesday.

According to analysts at Capital Economics, the number of people quarantined in China is at its highest level since Shanghai was locked down in the spring, with outbreaks in more than 50 cities.