Apple (NASDAQ:AAPL) needs little introduction. With a market valuation of $2.4 trillion, it is the largest publicly traded company in the United States, even after accounting for a 16% drop in its share price so far this year.

Apple didn’t build its business in a single year. It’s a story investors should watch long term because, since going public in 1982, it has generated a return of over 117,600%. In other words, an investment of just $10,000 back then would be worth more than $11.76 million today, assuming you held on all along.

Last week, the multinational tech giant released its financial results for the full fiscal year 2022, which ended on September 24. The results beat Wall Street’s expectations for revenue and earnings per share, but also reflected some weaknesses in a few different areas.

The share price initially jumped after the launch, but has calmed down a bit since then. Should long-term investors take a cue from short-term traders and use this as an opportunity to buy Apple stock ahead of further long-term growth?

Looking back on a difficult year

Despite the upbeat report, Apple is coming off a tough year, though certainly not alone. High inflation, supply chain problems and rising interest rates have affected various sectors of the economy. Businesses that rely on consumer spending have been hit hard as household finances have tightened, and Apple’s expensive devices, like its flagship iPhones, fit into the categories of goods suffering cuts.

In its fiscal year 2022, Apple’s revenue increased by just 7.8%, well below the previous year’s 33.2% growth rate. Of course, the economy was booming in 2021, as the Federal Reserve kept interest rates artificially low and the US government rolled out stimulus dollars in an effort to mitigate the economic impacts of the ongoing pandemic. The economic environment in 2022 is very different. 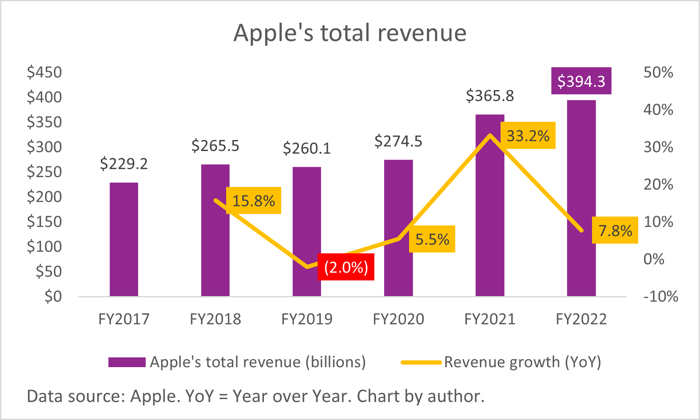 Apple launched a number of new products in September that should boost its sales in the upcoming holiday season. Its new iPhone 14 appears to be having an impact: Apple’s smartphone revenue rose 9.6% in its fiscal fourth quarter, which was a healthy improvement over the 2.7% rise in the fiscal third quarter. .

Similarly, after a year-over-year drop in the third quarter, sales of Mac computers and laptops rose 25% in the fourth quarter to a quarterly record of $11.5 billion. Wearables revenue rose 9.8%, driven by demand for the new Apple Watch Ultra and second-generation AirPods Pro.

Apple began reporting the financials of its services segment separately in 2017, and investors have paid close attention to those numbers ever since due to that segment’s strong growth and much higher gross profit margins.

Apple’s services segment includes almost everything it offers through a subscription, from iCloud to Apple Music to Apple TV+. As the fourth quarter closes, investors are wondering if consumers are starting to tire of subscriptions. It’s a question that gets asked the most after the streaming giant. NetflixThe subscriber base of was reduced during the first two quarters of 2022.

Price increases were one of the factors driving Netflix’s decline, with Apple recently raising the price of its popular Apple Music subscription, for example. The latest report didn’t have the answer, so we’ll have to wait and see if the recent spike has a negative impact. Relentless competition is another issue: Consumers are spoiled for choice when it comes to streaming platforms in general, and for many people, it’s getting harder to justify the expense of continuing to subscribe to as many as they’d like, especially in this economy.

That combination of factors could explain why Apple’s services segment revenue grew in fiscal 2022 at its slowest pace since the company began reporting it. It could also be that the pandemic has caused huge subscription growth in 2021 and 2022 is just feeling the hangover effects of the previous year’s outsized growth. This is a metric to watch for next year. 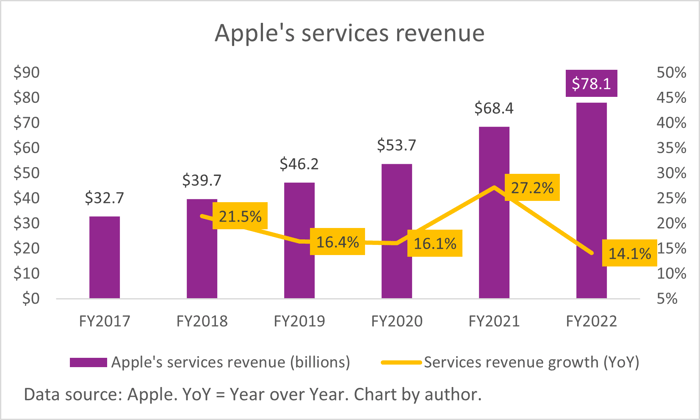 Even with the slowdown, Apple still set a service revenue record in the fourth quarter thanks to 900 million paid subscriptions across its ecosystem.

Apple has also broken new ground this year in the segment. It expanded its Apple Pay product by introducing Apple Pay Later, its own version of the “buy now, pay later” (BNPL) installment loan services that have recently become popular, particularly with younger buyers. This could take market share away from credit card providers, and since Apple has an installed base of nearly 2 billion active iPhones, its uptake could be much faster than its BNPL competitors.

Why Apple Stock Could Be a Buy Right Now

Yes, Apple’s growth slowed during fiscal 2022. And yes, economic weakness may linger for a while longer. Apple CEO Tim Cook highlighted those issues on the company’s earnings call along with geopolitical tensions in Europe and climate change as areas of concern.

But these challenges are not unknown. apple sailed recessions in the 1980s and 1990s, not to mention the technological shipwreck in the early 2000s, which was followed by the Great Recession of 2007-09. It surpassed them all and became the most valuable company in the United States.

The company is a cash-generating machine, and despite its short-term challenges, it is set to continue its long-term streak of success. With Apple shares trading down 16% year-to-date, this could be an opportune time to buy, especially for those with an investment horizon of at least five to ten years.

10 stocks we like better than Apple’s
When our award-winning team of analysts has stock advice, it’s worth listening to. After all, the newsletter they have published for over a decade, Motley Fool Stock Advisorhas tripled the market.*

They just revealed what they think are the top ten stocks for investors to buy right now…and Apple wasn’t one of them! That’s right, they think these 10 stocks are even better buys.