Sometimes it takes a few generations for technology manufacturers to get a perfect design. Samsung has been working on foldable phones for several years, but with this year’s releases, the Galaxy Z Fold 4 and the Galaxy ZFlip 4the company can argue that perseverance pays off.

The Z Fold 4 doesn’t look too different from last year Galaxy Z Fold 3. With folded dimensions of 6.11 x 2.64 x 0.62 inches (HWD) and weighing 9.28 ounces, it’s a bit slimmer and a bit lighter than last year’s model, but a bit more heavy and noticeably deeper than standard flagship phones. (For comparison, the galaxy s22 weighs 8.1 ounces while the Apple iPhone 14 Pro Max it weighs 8.5 ounces.) I didn’t find the weight difference to be much of an issue, but I found the added bulk to be quite noticeable when carried in a pants pocket.

When folded, you get a 6.2-inch, 2316 x 904-pixel display with a 120Hz refresh rate that looks great, even in very bright sunlight. It’s a bit wider than last year’s model, and I thought this was a noticeable improvement. It worked quite well for quick use such as directions or text messages, easily as good as typical flagship phone screens.

Of course, the big bonus comes when you open it up and get a 7.6-inch, 2176-by-1812-pixel display slate with a 4:3 aspect ratio and again a 120Hz refresh rate. You can see a slight crease on the screen, but that didn’t bother me, and Samsung says that the screen protector that covers it is much stronger than the one on the previous model. 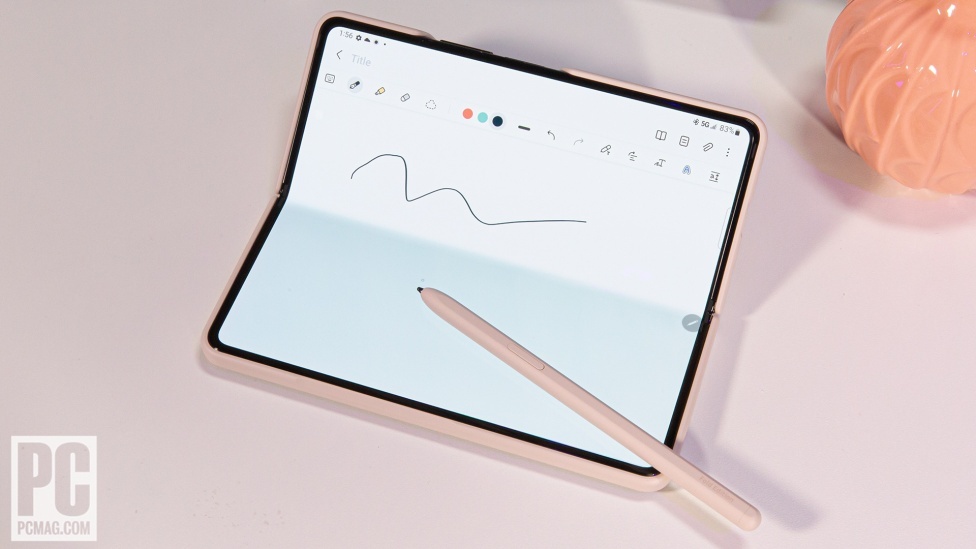 Using the device unfolded is ideal for surfing the Internet, sending emails and making video calls; It’s not the same as carrying a larger tablet, but it’s very nice. Email allows you to view both the list of messages and an entire individual message as you would on a traditional laptop. Multi-tab web browsing works much better and while I’m not a gamer, I’m sure the larger screen would be particularly good for that too. In open mode, Zoom calls looked great, and I thought the sound was better than on most phones.

It is also more suitable for multitasking. I found it particularly good for running two applications side by side, like email and web browsing, so you can easily search for something while writing a message about it, or take information from an email and add it to a presentation. I tried this with the basic Microsoft Office applications and they worked fine. (You can run three apps at once, and run some apps in two separate windows, but in practice, I didn’t do much.)

With Android 12 on the Fold, you’ll see an app dock at the bottom of the screen; just swipe up from the bottom to enable multitasking, touch and hold the app you want to add, and drag it to the part of the screen where you want it to appear. This worked very well.

As you’d expect from the Galaxy S series, the Z Fold 4 has very good cameras, a big step up from last year’s model. The main camera has a 50MP sensor, with an f/1.8 aperture, which did a very good job, even being very good at night shots. It also has a 10MP telephoto camera with 3X optical zoom (Samsung claims to have up to 30X digital zoom, though really anything over 10x is cause for trouble). The images seemed quite good to me, although the zoom does not match the Galaxy S22 Ultra, with its 10X optical zoom. The Z Fold 4 has a 10MP front-facing camera, which seemed reasonable enough, and a 4MP under-display camera (which you’d use if you were making video calls with the larger screen open) which was fine in good lighting, but not great.

It also has most of the other features of the S22 Ultra, including S-pen support (though the drive doesn’t come with a stylus) and Samsung Knox security. It’s powered by a Snapdragon 8+ Gen 1 processor with 12GB of RAM, and my unit came with 256GB of storage (models go up to 1TB of storage). It packs a 4400mAh battery with fast charging, and I found it easily lasted all day in my use.

Recommended by Our Editors

The phone supports all varieties of 5G used by all three major carriers in the US and has a single nanoSIM slot plus eSim support.

In short, it’s an incredibly powerful device, with a large screen, mostly excellent cameras, and great performance. Compared to last year’s model, it’s noticeably more refined: a little slimmer, a little more stable, with easier multitasking and better cameras. Compared to other flagship phones, it’s bulkier to carry and the camera zoom isn’t quite up to the standard of the S22 Ultra (however it seems to match almost any other phone), but you still have the option. to use a big screen With a starting price of $1,799, this is still a niche phone, only for people who really want to get the most out of almost everything. But if you consider it a replacement for both a phone and a tablet, it’s a viable option.

Here it is Full PCMag Review.

Enroll in fully mobilized newsletter to get our top mobile tech stories delivered straight to your inbox.

This newsletter may contain advertising, offers or affiliate links. Subscribing to a newsletter indicates your consent to our Terms of use Y Privacy Policy. You can unsubscribe from newsletters at any time.