Samsung’s Galaxy S23, S23 Plus and S23 Ultra smartphones usher in a new generation of mobile devices. This article will tell you everything you need to know about the three smartphones in terms of design, screen, features, camera, performance, battery life, and software.

The Galaxy S22 series will be replaced by the Galaxy S23 and its Plus and Ultra variants. We continue to look forward to these newcomers to the most beloved premium range in the Android ecosystem. Will we have the right to a modest evolution or significant changes and innovations? In this detailed Galaxy S23 article, you can find the answer to this question. 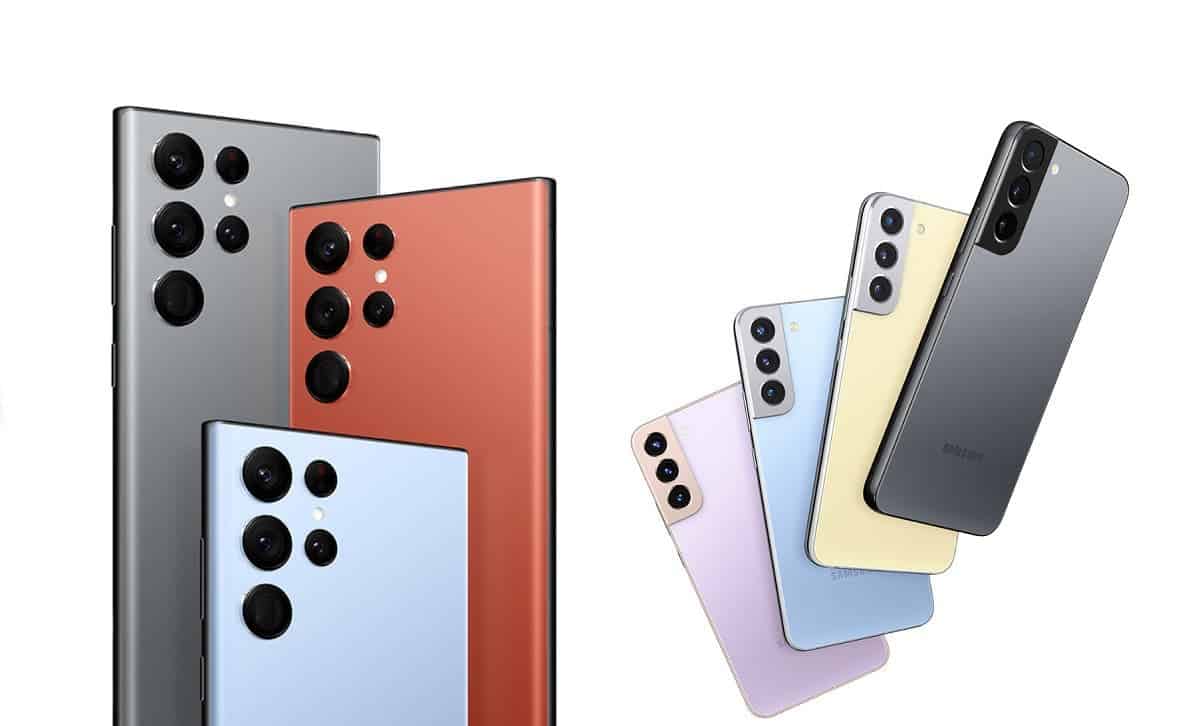 When it comes to the launch of smartphones for its main series, Samsung follows a very strict schedule. The South Korean manufacturer usually launches its Galaxy S in February. Because it no longer exhibits at the MWC in Barcelona, ​​​​where it previously unveiled its new models at the end of February for sale in March. Recall that on February 9 at the Unpacked conference, the Galaxy S22, S22 + and S22 Ultra were announced before going on sale on February 25.

However, Samsung has a good chance of launching the Galaxy S23 sooner than expected. The three new models could very well launch in early 2023, in January. This would be consistent with Qualcomm’s announcements that its next Snapdragon Summit conference will take place in mid-November instead of early December. Samsung is likely to get access to the chips sooner than in previous years, as will other manufacturers.

A poster of the Korean operator KT claims that the smartphones will be released from December 23 (or even the day before). With general availability in stores from January 6, 2023. It will be interesting to see if this leak is verified.

To get an idea of ​​​​what can be charged for this new generation, we will have to settle for the prices of the Galaxy S22, pending the formalization of prices by Samsung or a reliable leak from a reseller: 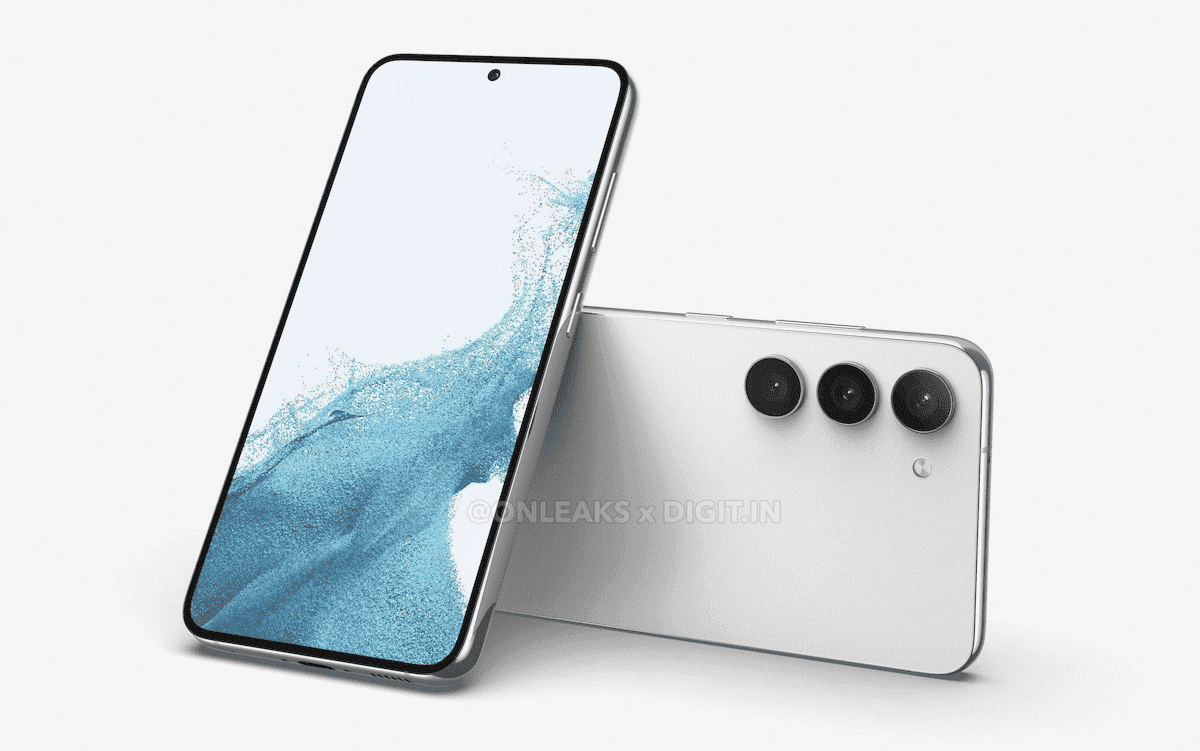 Samsung is being quite conservative with the design of its Galaxy S range of smartphones, similar to how Apple is with its iPhones. The Galaxy S22 Ultra, which replaced the Galaxy Note by including an S Pen stylus slot and adopting a less curved, squarer design, was the most recent significant change. The Galaxy S23 Ultra will likely have an even more angular chassis than the S22 Ultra, according to Ice Universe. The curved effect of the screen will also be less noticeable.

Interestingly, OnLeaks, which shared renders of all the models, has confirmed this. Two of the Galaxy S23 Ultra’s rear sensors are built directly into the body of the phone, giving it an edge over the Galaxy S22 Ultra’s slightly thicker chin. Additionally, we know that the Galaxy S23 Ultra will be smaller than the S22 Ultra, measuring 163.4 x 78.1 x 8.8mm vs. 163.3 x 77.9 x 8.9mm.

The design of the Galaxy S23 series will be very similar to what we already know for the most part. The bump will come back because there won’t be an under-display selfie camera like on the Galaxy Z Fold 4. This generation confirms that cameras are frequently the components that change the most between the two. The three cameras of the Galaxy S23 and S23+ protrude from the rear cover of the smartphone, forming three distinct islands as a result.

As expected, all three smartphones will be IP68 certified, making them resistant to dust and water. 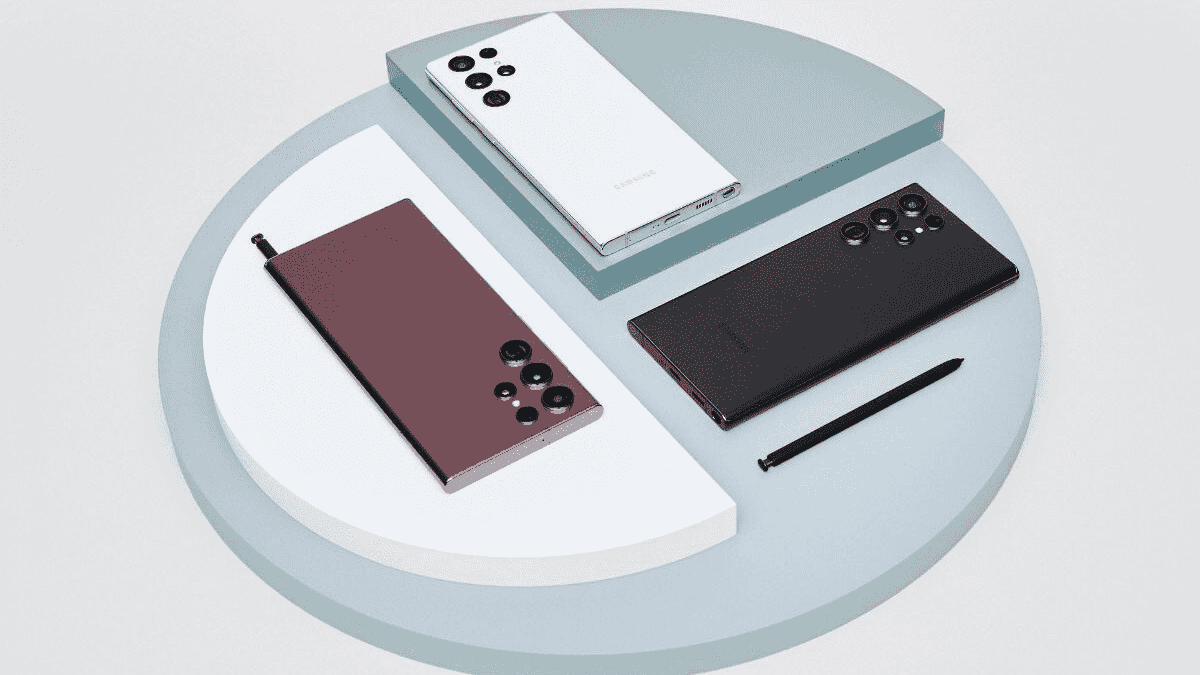 For the S23 series, Samsung uses its top-tier Super AMOLED display technologies. Thus, as has been the case since the Galaxy S21, the Dynamic AMOLED 2X screens are compatible with HDR10 + and offer a refresh rate of up to 120 Hz in all models. The screen of the Galaxy S23 Ultra has a resolution of 3088 x 1440 pixels (Quad HD+). While the screens of the Galaxy S23 and S23 Plus have 2340 x 1080 pixels (Full HD +). It is also classic in terms of sizes:

The Galaxy S23 Ultra should once again be the only model with an LTPO 2.0 display, allowing it to dynamically vary its refresh rate from 1 to 120Hz to suit the content being displayed and thus save battery life.

Samsung should install Qualcomm’s 3D Sonic Max, already found in the Vivo X80 Pro, below the S23 Ultra’s screen. This sensor can even register a fingerprint with a single touch and is faster and wider than other sensors. Also, it supports a security mode that uses two fingerprints at a time. 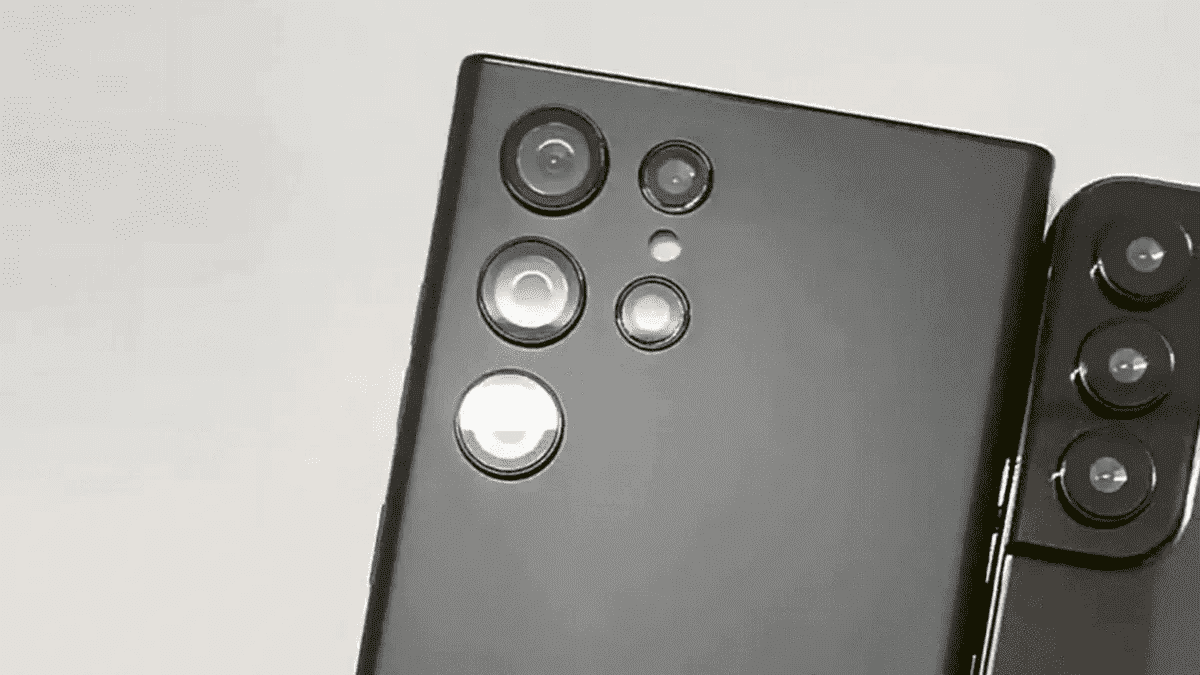 It has been discussed for years that Samsung might stop using its Exynos chips in its high-end smartphones in Europe, and now it may happen. Samsung will not offer Exynos SoC in 2023 or 2024. The manufacturer wants to take its time to develop a new high-performance chip for the market in 2025, as Exynos has always had trouble competing with Qualcomm’s Snapdragon. The ultimate goal would be to compete with Apple, the industry leader and grand champion.

The South Korean company and Qualcomm have agreed to a multi-year strategic partnership for chip delivery. To prevent heating and preserve the battery, the S23 series will ship with a Snapdragon 8 Gen 2 SoC, which has been declared more effective than the Snapdragon 8 Gen 1 SoC, especially at the GPU level. Qualcomm’s chief financial officer, Akash Palkhiwala, has also confirmed this.

This year, Qualcomm would choose a 1+2+2+3 core configuration, with one Cortex-X3 Prime core running at 3.36 GHz, two Cortex-A715 cores, two Cortex-A710 cores, and three Cortex-A510 cores, all running at 2.0 GHz. This information has also been verified by the initial Galaxy S23 Geekbench benchmark. The Galaxy S23 scored 1,524 points with a single core and 4,597 points with multiple cores.

However, only the Galaxy S23 Ultra will still have a 5,000mAh battery. In fact, we were able to see an image of the battery before launch, which confirms the same capacity. Also, on November 3, 2022, leaker IceUniverse revealed on Twitter that the Galaxy S23 will have a unique power saving mode. In fact, it will extend battery life by slightly reducing performance. Also, and more importantly, this choice will not affect how quickly the panel updates. As a result, it will be possible to maintain 60 or 120 Hz while taking advantage of the additional autonomy. 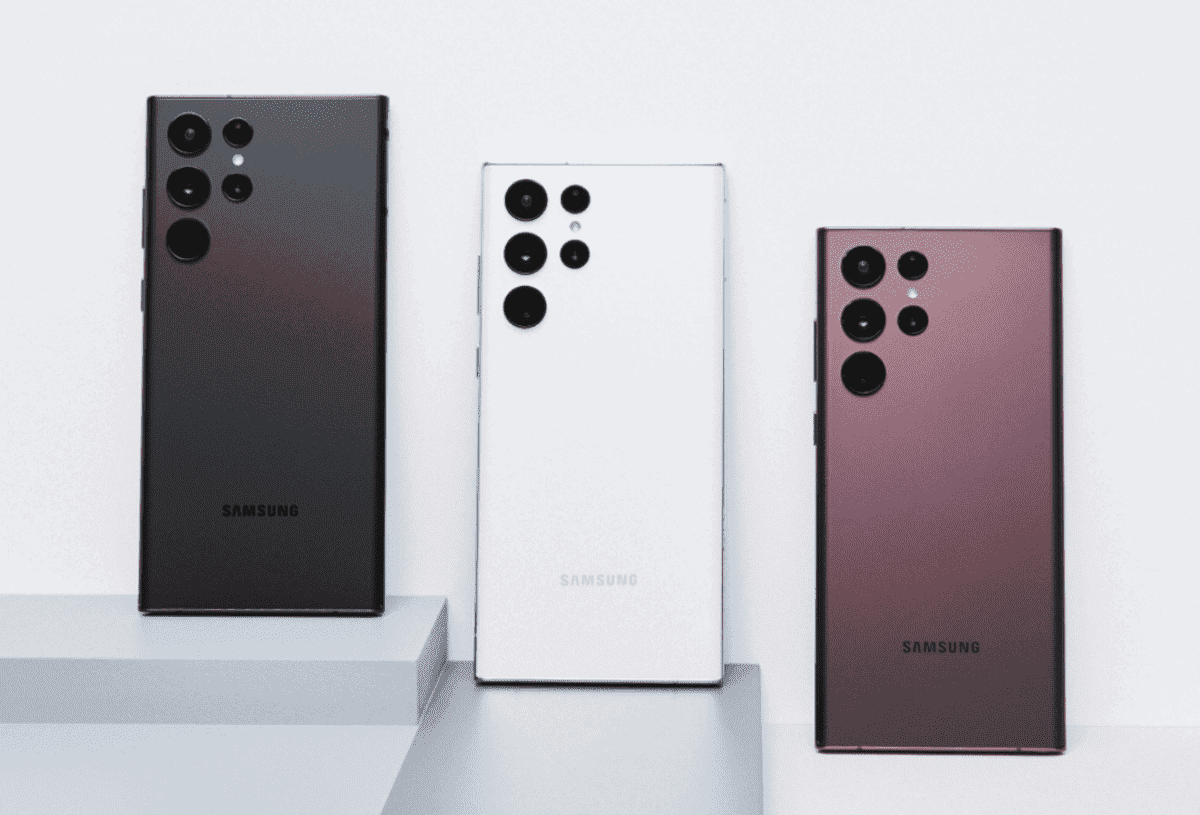 Every year, the Galaxy S Ultra model is among the best smartphones available. And the Galaxy S23 Ultra should be no different. The 108 MP sensor that has been in the Ultra since the Galaxy S20 will be replaced by a new 200 MP photo module from Samsung this year, which is a first. But it shouldn’t be the familiar Samsung ISOCELL HP1, which we’ve seen in action on Xiaomi and Motorola smartphones. Instead, Samsung would create ISOCELL HP2, a variant of HP1. With a smaller sensor (1/1.3 inches) but quite effective.

Due to a more sophisticated pixel fusion technique, these 200 megapixels will not only allow you to take ultra-high definition photos, but will also produce images with more light. In fact, because this sensor has a large number of pixels. It is now possible to combine many of them to create larger, brighter pixels while still maintaining high resolution.

Due to its highly developed night mode, some are already quick to proclaim that the Galaxy S32 Ultra will be the best smartphone for photography in 2023. The Galaxy S23 Ultra should retain the optics of the S22 Ultra, including a 10 MP ultra wide angle . lens, a 10 MP telephoto lens with optical image stabilization and up to 3x optical zoom, and a 10 MP periscopic lens with 10x optical zoom.

Although it is unknown at this time if a hardware upgrade is intended. The Galaxy S23 and S23 Plus would maintain a shared technical sheet regarding the camera. A 50 MP ISOCELL GN5 main sensor, a 12 MP ultra wide angle. And a 10 MP telephoto lens with a 3X optical zoom will be present if nothing changes.

Ever since the Ultra model first debuted in the lineup, the front-facing selfie camera has always benefited from a 40MP module. And that should continue to be the case. In recent years, the 10 MP lens on the Galaxy S22 and S22 Plus could be replaced with a 12 MP lens. 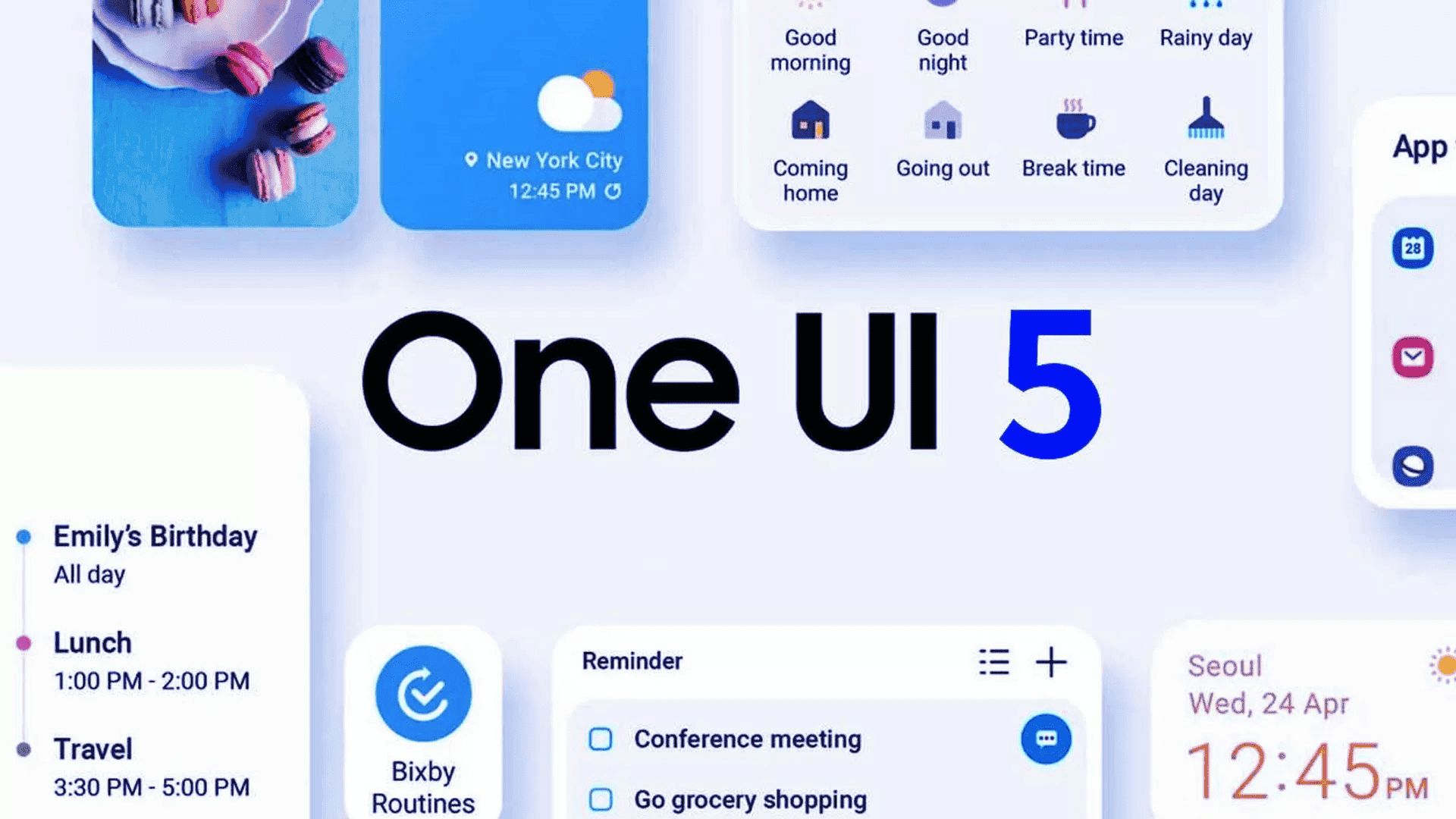 The Galaxy S23 series of smartphones will debut One UI 5, Samsung’s custom interface based on Android 13, the latest version of the mobile operating system. In this version, the interface design is changed. The notification panel has been redesigned and there are also new alert icons, slightly adjusted opacity for quick settings. And a change in the location of the dialog that manages user authorizations.

The company also improved system animations and added new multitasking gestures. Optical Character Recognition, which recognizes text from images for easy copy and paste, is one of the new features. WiFi connection quality assessment for OneUI 5.0 Internet connection is another innovation. It allows you to access a wealth of data about your home network performance, identify dead spots throughout your property, and guide the proper installation of Wi-Fi repeaters.