NEW YORK (AP) — Stocks rose Monday on the eve of Election Day as Wall Street anticipated the benefits of a possibly divided government in Washingtonthough trading is likely to remain choppy in a week full of potentially market-shaking events.

Analysts say many investors appear to be betting that Republicans will take control of at least one house of Congress. With a divided government, gridlock is more likely than sweeping, sweeping policy changes that could upset fiscal and spending plans. And historically, when a Democratic White House has shared power with a divided or Republican Congress, stocks have seen stronger-than-usual gains.

“The conventional wisdom that the stock market likes political gridlock is backed up by the historical data in this case,” according to Lori Calvasina, head of US equity strategy at RBC Capital Markets.

Of course, that means a better-than-expected performance by Democrats in the midterm elections could hurt stocks. Investors may fear that Democrats emboldened by such a scenario will push for more spending to help the economy. That, in turn, could be a sign that the Federal Reserve would have to increase interest rates even more to control inflation.

A person walks past an electronic stock board displaying Japan’s Nikkei 225 index at a stock firm on Monday, November 7, 2022 in Tokyo. Asian stocks were mostly higher on Monday as investors weighed uncertainties such as the US mid-term elections and potential moves by China to ease coronavirus restrictions. (AP Photo/Eugene Hoshiko)

People stand near an electronic stock board displaying Japan’s Nikkei 225 index at a stock firm on Monday, November 7, 2022 in Tokyo. Asian stocks were mostly higher on Monday as investors weighed uncertainties such as the US mid-term elections and potential moves by China to ease coronavirus restrictions. (AP Photo/Eugene Hoshiko)

A person stands in front of an electronic stock board displaying Japan’s Nikkei 225 index at a stock firm as a car drives by on Monday, November 7, 2022, in Tokyo. Asian stocks were mostly higher on Monday as investors weighed uncertainties such as the US mid-term elections and potential moves by China to ease coronavirus restrictions. (AP Photo/Eugene Hoshiko) 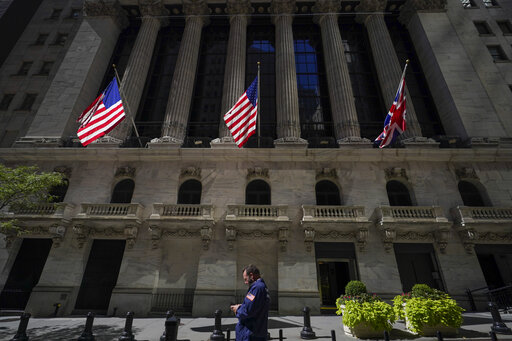 FILE – A trader looks at his cell phone outside the New York Stock Exchange, Wednesday, Sept. 14, 2022, in the financial district of Manhattan in New York. (AP Photo/Mary Altaffer, File)

A Republican victory would also introduce its own risks. It could again fuel brinkmanship by Republicans around the nation’s debt limit and threaten another government shutdown, according to strategists at Morgan Stanley.

Either way, the markets may have to wait a while for clarity due to the process of counting the votes that came in the mail.

Meanwhile, Wall Street awaits a report scheduled for Thursday, when the US government will show how bad inflation was across the country last month. And that will influence what has been the main driver on Wall Street this year, much more than politics: what the Federal Reserve does with interest rates.

Economists expect the report to show that the consumer price index was 8% higher in October than a year earlier, which would represent a slight slowdown from September’s 8.2% inflation rate.

A fourth consecutive month of moderation in inflation from June’s 9.1% rate could offer some relief. Such a trend line could also give the Federal Reserve some wiggle room to relax a bit in its campaign to hike rates aggressively to force inflation down.

The Fed has said it may soon reduce the size of its hikes to half a percentage point, after pushing through four consecutive three-quarter point mega hikes. Higher rates slow down the economy by making it more expensive to buy a house, a car or anything else on credit.

But rates that are too high also increase the risk of a recession, while dragging down stock prices and all kinds of investments. And rate hikes take a long time to kick in, though exactly how long that is is debated by economists.

“The lags are different every cycle and for different reasons, and we just don’t know when the adjustment will have the impact that was intended,” said Keith Buchanan, portfolio manager at Globalt Investments.

“It all comes down to one question,” Buchanan said. “What impact has the Fed tightening had on inflation?”

Even though the Fed has said it may soon scale back the size of its hikes, it still warns markets that it may ultimately raise rates more than expected given how stubbornly high inflation has been. The Fed has already raised its key overnight rate to a range of 3.75% to 4%, up from virtually zero in March, and more investors expect it to top 5% next year.

Monday’s gains for Wall Street came despite a shaky performance from its most influential stocks. Apple rose 0.4% after falling earlier in the day. I had clients warned they will have to wait longer to get the latest iPhones after anti-COVID restrictions were imposed on a contractor’s factory in China.

Speculation has recently increased that China may move away from its business-damaging zero-COVID policies. If the world’s second-largest economy were to do so, it could provide a boost to a global economy facing far-reaching threats as central banks around the world raise rates due to high inflation.

In addition to the election, inflation and China, earnings reports from US companies are also boosting stock prices.

Summer earnings reporting season is nearly 85% complete, and S&P 500 companies are on track to deliver just over 2% growth. That’s close to analysts’ forecasts, though several companies have warned of tougher times ahead as inflation remains high and the economy looks increasingly fragile.

Analysts now forecast a drop in S&P 500 earnings for the final three months of the year of nearly 1.5%. They had been forecasting 4% growth at the end of September.

Copyright 2022 Associated Press. All rights reserved. This material may not be published, broadcast, rewritten, or redistributed without permission.