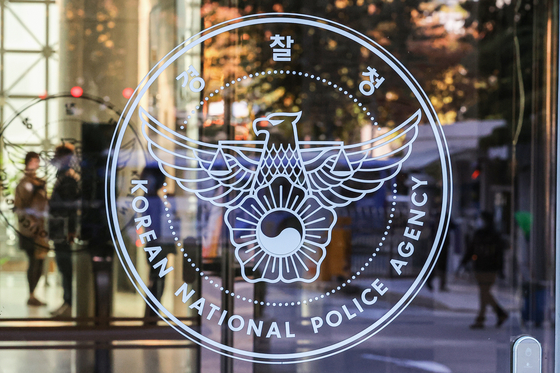 The headquarters of the National Police Agency in the Seodaemun district of central Seoul on Friday. [YONHAP]

Lee Im-jae, chief of the Yongsan Police Station on the night of the Itaewon crush, lied about his whereabouts that night, according to police investigations.

The Ministry of the Interior and Security and the police initially said that Lee arrived at the scene at 10:17 pm on October 29, minutes after the accident occurred, and immediately took charge.

Around 130,000 people gathered in Itaewon for the first Halloween celebrations that day. Overcrowding in the alleys behind and next to the Hamilton Hotel in central Seoul’s Yongsan district led to crowds agglomerating around 10:15 p.m., leading to 156 deaths.

The police special investigation team revealed on Saturday that Lee, after supervising a rally near the Yongsan presidential office earlier that day that ended around 8:30 p.m., arrived at a neighborhood restaurant for dinner with officers. at 9:24 pm It was said. He having received a situation report from the crowd at around 9:30 pm and left by car for Itaewon at 9:47 pm He was said to be sober.

The police car approached the Noksapyeong station, just 800 meters, or half a mile, from the scene of the incident, at around 9:57 p.m., but was unable to pass due to traffic. The distance would have been about 10 minutes on foot. However, Lee insisted on driving.

The car swerved and Lee arrived at Itaewon Antique Furniture Street, about 200 meters from the Itaewon Police Station, finally getting out of the car around 10:55 p.m.

He finally reached the Itaewon Police Station on foot at 11:05 p.m.

This was after dozens of deaths had occurred. Lee was said to order from the rooftop of the station.

The station is 150 meters from the scene of the tragedy, but the alley where the deaths occurred cannot be seen from the roof.

Lee’s route that night was confirmed through his own testimony, witnesses and CCTV footage.

CCTV footage released by the media on Sunday showed Lee walking slowly down Itaewon Antique Furniture Street, with his hands behind his back, at 11:59 pm on October 29.

This contradicted the initial report from the Yongsan Police Station that Lee had taken command at the scene around 10:20 p.m.

The investigation team accused him of being late to the scene, neglecting command and management functions, and delaying reporting to superiors. Lee is accused of falsifying documents to make it look like he was at the scene before him.

Lee was removed from his duties last Wednesday.

Lee wasn’t the only one whose whereabouts were unclear on the night of the tragedy.

As the police response to the tragedy is examined, serious flaws in the reporting system up the chain of command are revealed.

Ryu Mi-jin, a situation monitoring officer at the Seoul Metropolitan Police Agency who was on duty the night of the tragedy, was not in Situation Room 112 at the time of the incident and did not show up for about 85 minutes. .

The investigation team said Friday that she was in her office instead of monitoring and managing the situation from the Emergency Dispatch and Operations Command Center.

It was said that he finally arrived in the situation room at 11:39 p.m.

According to police, the first call from the 112 emergency hotline warning of the possibility of being crushed came that same afternoon at 6:34 pm, the first in a series of similar reports. Police finally issued a Code 0 warning at 8:53 p.m. Code 0 in a five-tier emergency response system requires the quickest dispatch of police.

As of 11 pm, some 98 calls were made from people reporting similar concerns.

In accordance with 112 emergency response guidelines, Code 0 cases require real-time responses. And large-scale disasters with multiple reports require the monitoring officer in charge, who would have been Ryu, to report to the head of the Seoul Metropolitan Police Agency.

Lee reported the situation to Seoul Metropolitan Police Agency Commissioner-General Kim Kwang-ho at 11:36 pm and began heading to the scene. He was at his home in the Gangnam district, south of Seoul, after overseeing demonstrations in Gwanghwamun earlier that day. Kim was said to have missed three calls from Lee several minutes earlier. He arrived in Itaewon at 12:25 a.m.

According to police guidelines, a first response and report to the chain of command should have occurred within 35 minutes, which did not happen that night.

Yoon Hee-keun, commissioner-general of the National Police Agency (NPA), who was said to have received an initial report at 12:14 a.m. on October 30, missed earlier reports of the disaster because he had fallen asleep during a private camping trip. .

After walking with friends, he fell asleep around 11pm at a campsite in Jecheon, North Chungcheong, unaware of the unfolding tragedy in Seoul.

Yoon received a first text message from an NPA official about an accident with fatalities at 11:32 p.m., according to his smartphone records, according to the NPA on Friday.

After Yoon did not respond to the following, an NPA official called him 20 minutes later at 11:52 pm, but again, the police chief did not respond. He finally received the phone call about two hours after the incident at 12:14 am the next day, after the entire country had learned of the disaster.

He eventually gave orders over the phone to Seoul Police Chief Kim, calling for a full response to the disaster.

Yoon finally chaired an emergency response meeting at the NPA at 2:30 am on October 30. That was the time it took to get from Jecheon to Seoul.

These failed communications up the chain of command explain why it took so long to mobilize police forces, especially as there were some 4,800 riot police in central Seoul monitoring demonstrations around the clock.

Riot police first arrived at the disaster site at 11:40 pm, or 85 minutes after the incident, according to data presented by the Seoul police agency to Democratic Party representative Lee Sung-man on Sunday.

A total of five police squads from the Seoul Metropolitan Police Agency that had been monitoring demonstrations in the capital earlier that night were dispatched to the scene. Yongsan Police Station requested reinforcements at 23:17 and the first squad arrived at 23:40 The other four squads arrived between 23:50 and 13:33

According to these data, eight conscripted police units were also dispatched to the scene at 12:11 a.m. on October 30 and arrived between 12:50 a.m. and 1:12 a.m., well after the accident.

Ryu was also removed from her duties. The special investigation team is investigating Ryu and Lee’s possible negligence that night.

Police officers are not the only authority figures under fire.

Park Hee-young, head of the Yongsan District Office, traveled to her hometown of Uiryeong County in South Gyeongsang to attend a festival on the day of the tragedy and returned to Seoul around 8 p.m.

According to reports, he passed through Quy Nhon Street in Itaewon, which is about 130 meters from the disaster site, at 8:20 pm and 9:30 pm Do not take any action.

Home Affairs and Security Minister Lee Sang-min was also criticized for not knowing what was going on until 11:20 pm on October 29.

The president was notified of the situation at 11:01 pm, and Lee was reportedly briefed by Yoon.

As of Friday, the National Police Agency’s special investigation team questioned 85 witnesses, victims and nearby shopkeepers and reviewed 141 pieces of CCTV video. It is working with the National Forensic Service to recreate the October 29 incident through a 3D simulation.