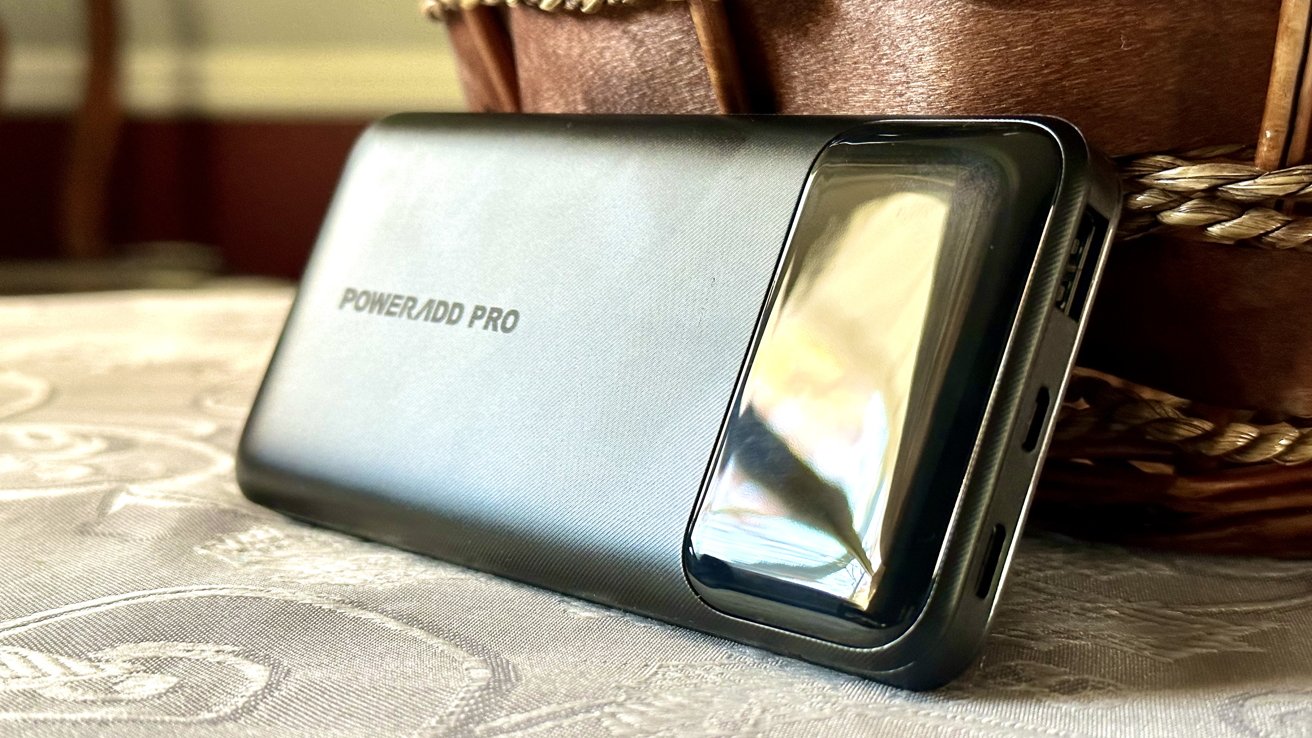 Their iPhone It may already get you through the work day, but the Poweradd Pro portable charger combines ease of use and design to go even further.

The charger ships with the charger itself and a USB-C to USB-A charging cable to charge the power bank or one of your devices.

The Poweradd Pro portable charger brings a modern and easy-to-use design with the push of a button to control it. It weighs, in total, only 9.1 ounces.

One third of the body of the power bank is an LED display that shows how much battery power is left in the charger as a percentage. As you charge a device, or multiple devices, you’ll see that percentage actively decrease.

There are three ports included in the power bank: one USB-C, one USB-Micro-B, and one USB-A. The single button located on the right side of the body will control the power off and on of the device. One press will turn it on and show how much power it currently has, and a long press will turn it off.

The power bank is built with 10,000 mAH (milliamp hours) inside and can fully charge your devices.

The LED display will show how much battery is currently in the Poweradd Pro when charging it, and will continue to actively increase in percentage when it receives more power from charging.

The Poweradd Pro can charge devices such as phones, tablets, headphones, smart watches, and other wearable accessories.

The USB-C port also enables fast charging, which will charge your devices faster through the USB-A port. When you are using fast charging, a small “FAST” sign will appear next to the battery percentage on the Poweradd Pro.

When testing fast charging, the device seemed to charge a iPhone 14 ProMax pretty fast. Got the iPhone from 20% to 62% in 30 minutes. However, this is a bit short of the company’s claim that the portable charger can bring your device to 50% in 30 minutes.

The downside is that fast charging seems to stop after your device reaches 80%. Once you reach that amount of battery, the “FAST” sign disappears from the portable charger screen.

The charger took over two hours to charge the iPhone 14 Pro Max from 20% to 100%. The Poweradd Pro still had 37% power left once the iPhone was fully charged.

Just like when the Poweradd Pro is charging, the LED display will stay on and show how much battery is left inside while charging your device(s).

The Poweradd Pro is capable of charging two devices at once through both charging ports.

The Poweradd Pro is a great portable charger to take on the go. It’s lightweight, easy to understand, has plenty of battery life, and is versatile for both charging itself and charging other devices.

The only downsides to the charger were that fast charging doesn’t stay on for the entire charge and the last 20% (after the device’s 80% battery is full) felt like a drag and took too long.

The Poweradd Pro brings a lot to the table and uses modern connectors to be able to charge a multitude of devices, and with the 10,000mAH battery inside it can charge one device to the max. The display is also a great addition to knowing exactly how much battery power is left in the portable charger.

For $20, the POWERADD PRO is worth looking at, and if you do get it, make sure you have a USB-C cable to get all the charging capabilities it has to offer.

Where to buy the Poweradd Pro

The Poweradd Pro is available for $20 at Amazon (with a current 25% discount coupon available for it). The only color option currently offered is black.