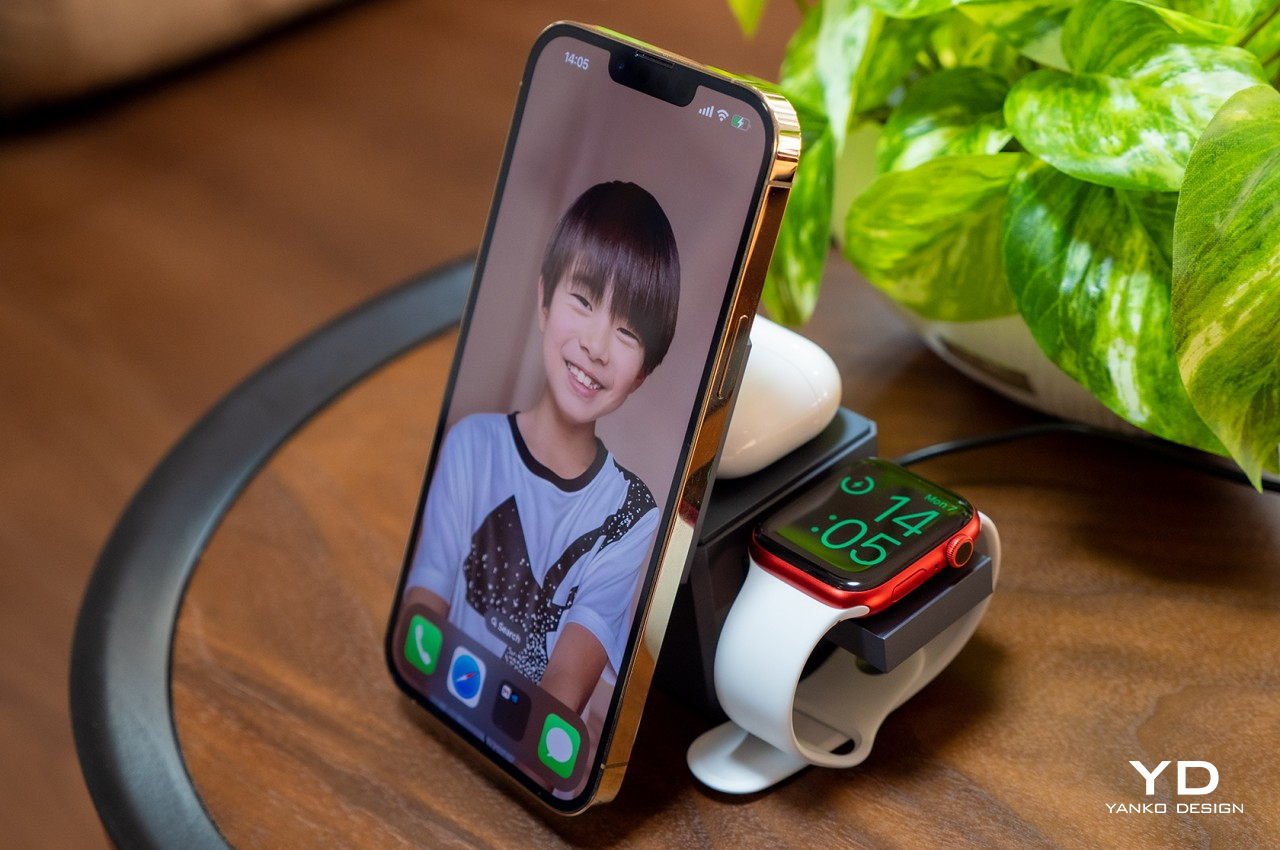 Cute, compact, and capable, the Anker 3-in-1 Cube with MagSafe Charging Station is a great addition to any Apple fan’s arsenal if they can get past the charging time and price.

With Apple’s trifecta of mobile devices being able to charge wirelessly, there’s been a rise in charging stations trying to accommodate all three. While that’s not always the case, it’s likely that many people who own an iPhone also own an Apple Watch or AirPods. By contrast, those who own an Apple Watch or AirPods are guaranteed an iPhone. The 3-in-1 wireless charging pads for these three initially came in the more common flat-bed shape, but this design has become somewhat dated and impractical due to the amount of space they take up. Some charging dock designs have gotten smarter and more sophisticated to use very little space, but these beautiful docks aren’t things you can take with you on your travels. Casting its net wide, Anker released a pretty adorable 3-in-1 Cube charging station for that very purpose, so give it a few spins to see if it’s more than just a pretty face.

Anker’s 3-in-1 cube with the MagSafe design is unusual enough to catch the eye of anyone, at least anyone who’s paying too much attention to their desk or things. In its folded, idle form, the charging station almost looks like a desk toy if it weren’t for the obvious Anker branding. However, its black surface and premium appearance suggest that it is not a toy, but it will still be an eye-catcher either way.

When fully unfolded, the Cube looks like a toy battle station with a sloping top and extruded shelf on one side. Those familiar with wireless charging accessories will now see telltale signs of that kind of functionality, especially with the ring marking MagSafe-compatible chargers, as well as the white concave surface common on Apple Watch chargers. When all charging surfaces are occupied, the charging station definitely looks like a battle station. Some may find it too busy to the point of distracting, but it definitely saves a lot of horizontal and vertical space to keep your desk or shelf tidy. 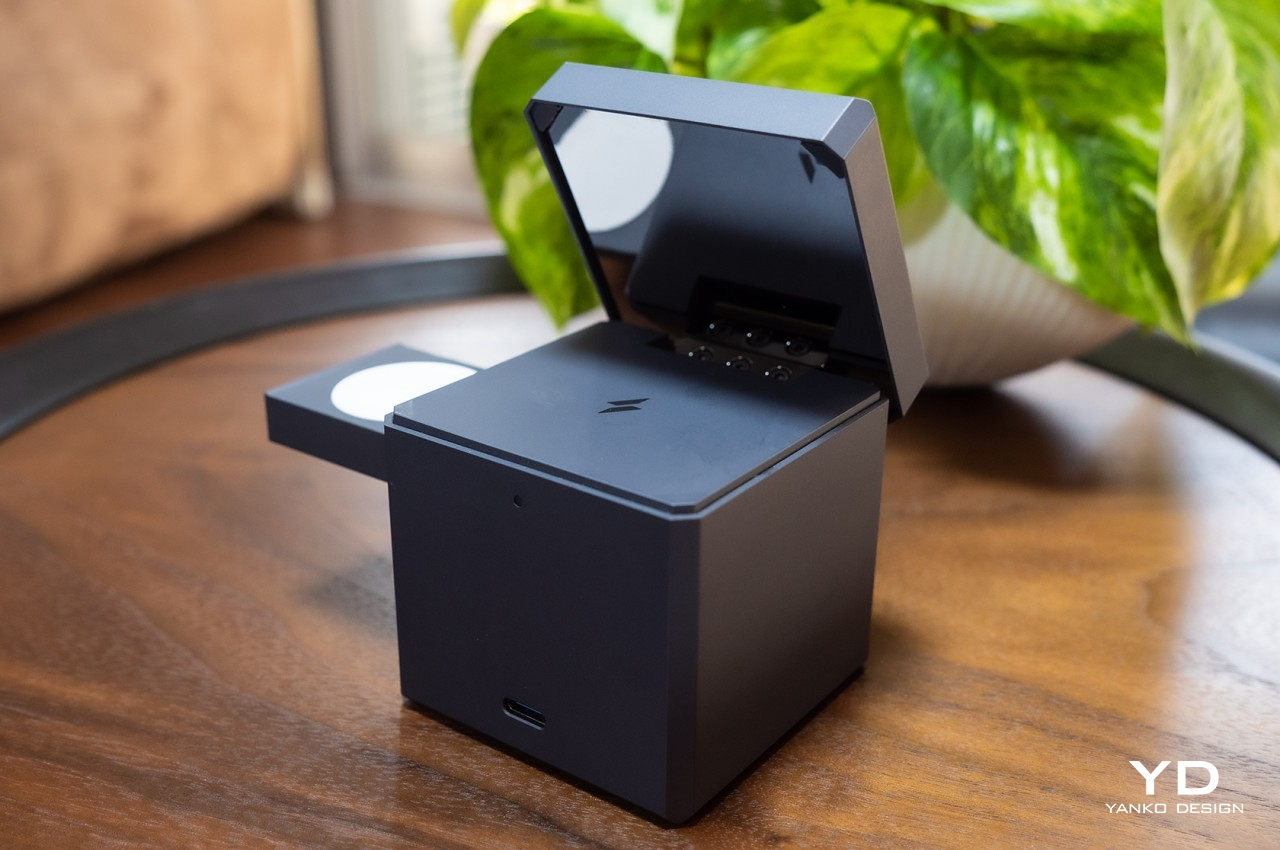 The accessory is pretty minimal in terms of visual design, but Anker put in some weird accents that try to spice things up without making much sense. There’s a small patch of reflective material on the front for the adjustable phone charger hinge, for example. Even weirder, though, is the mirror surface under that “cap,” reflecting either the AirPods case’s charger or the case itself. Its purpose is a complete mystery, as it can’t actually be used as a mirror for your face, nor does it reflect anything you can’t see directly anyway.

Overall, the Cube’s unique appearance makes it a nice accent on a desk, whether folded or unfolded. However, its compact form is also ideal to keep in your bag when you need to travel with all your Apple devices. It’s a bit heavy at 14.46 oz/409 g, but that also means it’ll stand up without wobbling on desks or tables, even if all you’re carrying is the Apple Watch and nothing else.

Anker’s 3-in-1 Hub with MagSafe has a simple look that belies its functionality. After all, who would expect that a small box could hold three devices at once? Fortunately, the accessory is also so easy to use that you can never go wrong, even if you try hard. It’s trivial to set up any of the three charging points and still fold the box in a flash, making it ideal for people who need to pack up and go at a moment’s notice.

The charging area for iPhone and other compatible smartphones lifts up like the lid of a treasure chest, except the opening faces away from you. This allows the phone to tilt towards you instead of always facing the ceiling. It can only tilt up to 60 degrees, but that’s more than enough to view the phone’s screen comfortably. Since this is MagSafe charging, the phone won’t slide down in that position either. Even better, you can also lay your phone on its side, turning the charging station into an ad hoc kickstand for watching videos. 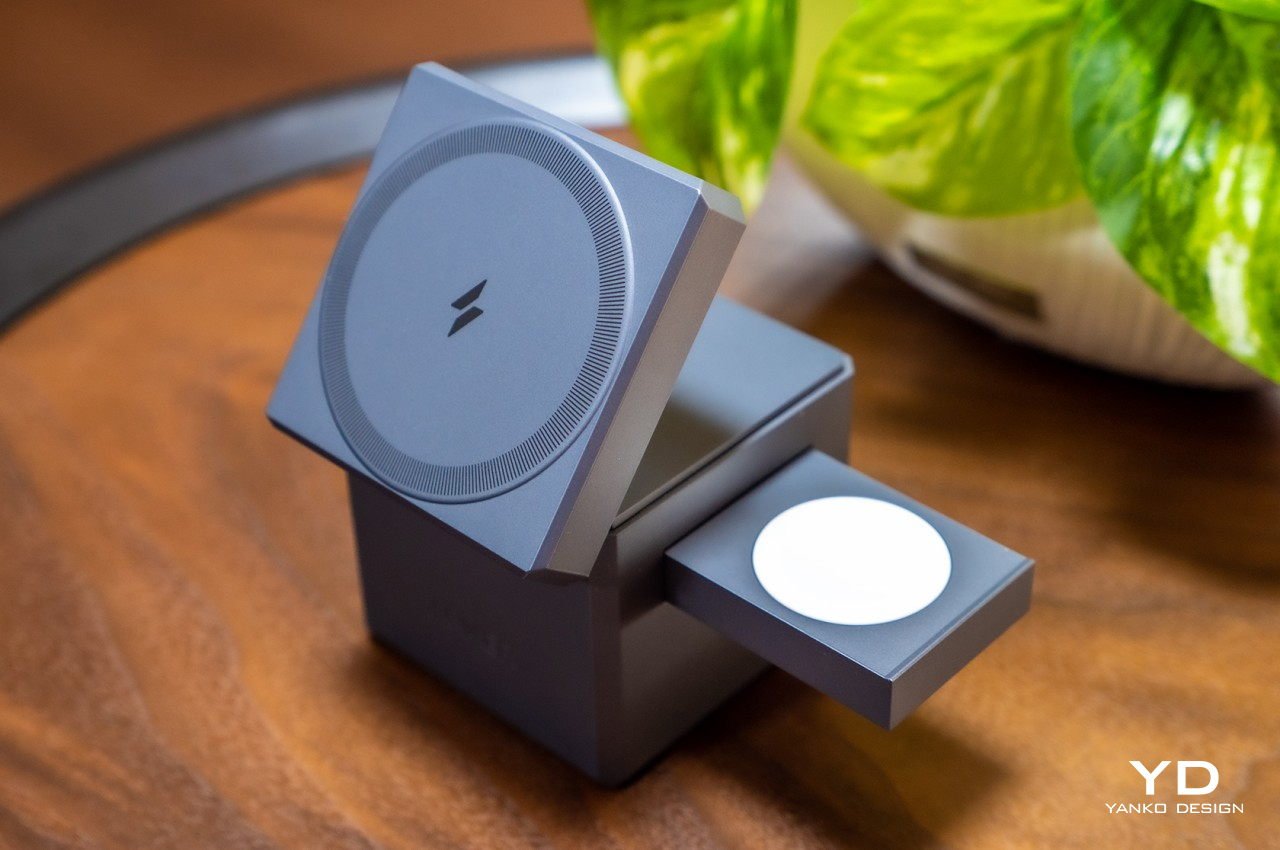 The Apple Watch charger pops out the side with a simple push, revealing a familiar surface to place your phone on. This retractable mechanism makes it super easy to access that feature out of the way when you don’t need it. There’s enough room to fit Apple Watches of any generation, though the small footprint may make the larger Ultra model a tight fit. Unlike the iPhone’s charging part, the Apple Watch’s charging pad is fixed at its angle, so you won’t have access to its Nightstand feature while charging. That may not be necessary since the iPhone can be charged at a visible angle, but that won’t be the case if the Apple Watch is the only one sitting there.

Compared to the iPhone and Apple Watch, the charger for AirPods is a bit more awkward, but still convenient. You’ll need to open the phone’s charging “lid” to fit the charging case into the slot, so there’s no way to keep that top closed while charging the AirPods. Since it will be on the back of the charger, there is no way to check the charge status of the case without having to turn the case over. It’s not exactly a lot of work, but it could be inconvenient, especially when you consider that the charging cable could be pulled in the process.

While the 3-in-1 Hub with MagSafe offers the convenience of charging all three devices at the same time, it doesn’t exactly offer the fastest charging speeds for any of them. In the box, the iPhone’s MagSafe charger maxes out at 15W, while the AirPods charger tops out at 5W. Perhaps the most disappointing figure is the Apple Watch charger at its 5W maximum speed.

The iPhone charger’s 15W output is certainly faster than what Apple’s old chargers put out for years, but it’s not the fastest now that Apple has embraced more modern technologies. You can fully charge an iPhone 14 Pro Max in almost three hours, but smaller iPhones will definitely charge faster. Magnets are definitely strong enough to hold that big iPhone in place, but some people may want to pay extra attention to the cases they use, in case they’re too thick to make a proper connection. 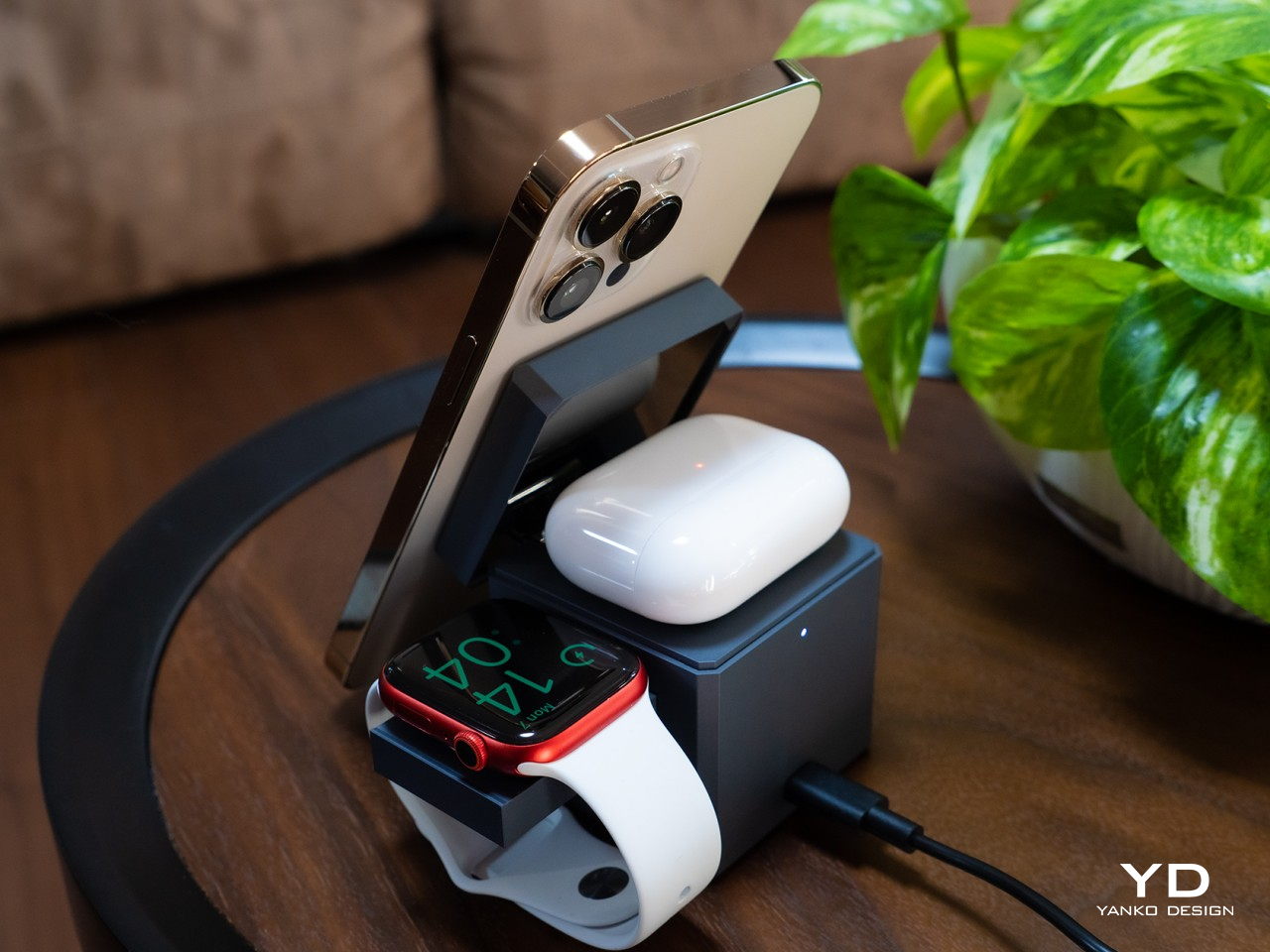 Unfortunately, at 5W, the Apple Watch charger is behind the times, but that might not matter much to people who charge the smartwatch overnight or during work hours. It takes about two and a half hours to fill up the Apple Watch, which is a long time unless you’re in a hurry. Anker is definitely capable of providing more power, but it may have had to make some compromises to get Apple certification for MagSafe products. In a compact case like this, higher performance could lead to higher temperatures which, in turn, could become a safety risk.

Anker ships a 30W charger in the box along with a 5ft/1.5m USB-C cable (more on that later). That high output is necessary to supply enough power to all three devices simultaneously, so it’s also a good thing that the respective chargers need very little in the first place. The power brick has foldable plugs that make it compact and easy to slip into a bag, along with the 3-in-1 Cube. Given its output, it might even be the only charger you’ll need to carry aside from your laptop charger, even for some wired devices.

Like many mobile device accessories and consumer electronics, the 3-in-1 Cube for MagSafe uses many plastic materials. Fortunately, Anker is one of those companies trying to change that formula and reduce their negative impact on the environment. The charging station itself is typical in that regard, but Anker has taken steps to mitigate the damage.

Like Apple, it started by reducing the amount of plastic it uses in packaging by an average of 90%. It has also changed the inner packaging material from plastic to pulp and used 100% recyclable FSC-certified packaging paper, which also uses natural soy ink to reduce the use of harmful chemicals. While the Cube itself has a lot of plastic, its more compact size allowed Anker to reduce it by 30.9g during construction.

Unfortunately, those sustainability gains are undone by shipping a charger with the Cube. For one thing, it’s definitely convenient as you won’t have to search for a 30W charger, assuming you don’t already have one anyway. Admittedly, not all iPhone users have such a fast charger, as Apple no longer ships one with iPhones. With the addition of adapters for different plugs, that still adds a pretty significant amount of plastic to the total package, not to mention making the package bigger than it could be.

There is also the concern of repairs and replacement parts, especially with a pop-up mechanism for the Apple Watch charger. It’s a bit more complex than a simple hinge and adds moving parts that will wear out over time. It could definitely be the part that gets damaged first, and it’s not going to be something that homeowners can fix themselves. And once that mechanism is broken, access to one of the device’s critical functions also goes out the window. 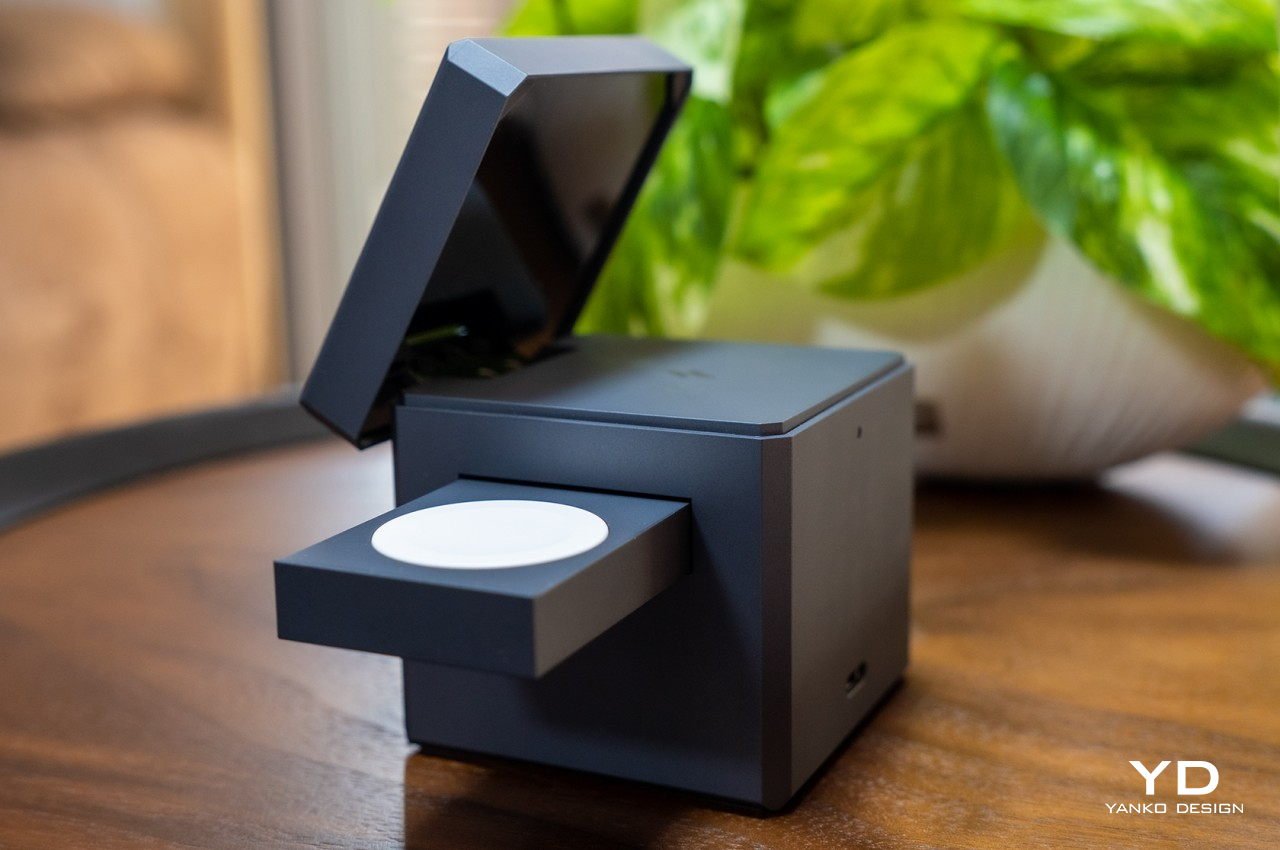 In terms of design and convenience alone, the Anker 3-in-1 Cube with MagSafe already looks like a solid offering. Cute, attractive, compact and multifunctional, it’s both a great travel accessory and an eye-catching desktop decoration. And since it comes with a Made for MagSafe certification, it comes with the same confidence that people place in Apple’s own products.

It costs a pretty hefty $149.95, which is quite a bit higher than what other 3-in-1 docks cost. Given the average charging speeds, you might be reluctant to make such an investment, especially if you rely heavily on of super fast charging. That said, you’d be hard-pressed to find something as adorable and as space-efficient as this, especially one that you can easily take on your regular travels.

Who said charging docks have to be literal docks that take up a lot of space on your desk or shelf? Who says they have to stay on said desk or shelf in the first place? Anker’s 3-in-1 Cube with MagSafe Charging Station definitely doesn’t say so and challenges the status quo for this guy. Yes, it’s a bit pricey and charging speeds could be better, but one can imagine that Anker had to make some compromises to keep the device small and meet Apple’s requirements. Minimalist yet attractive, compact yet multifunctional, this little box is a great companion anywhere, whether it’s on your desk or on your hotel room nightstand. 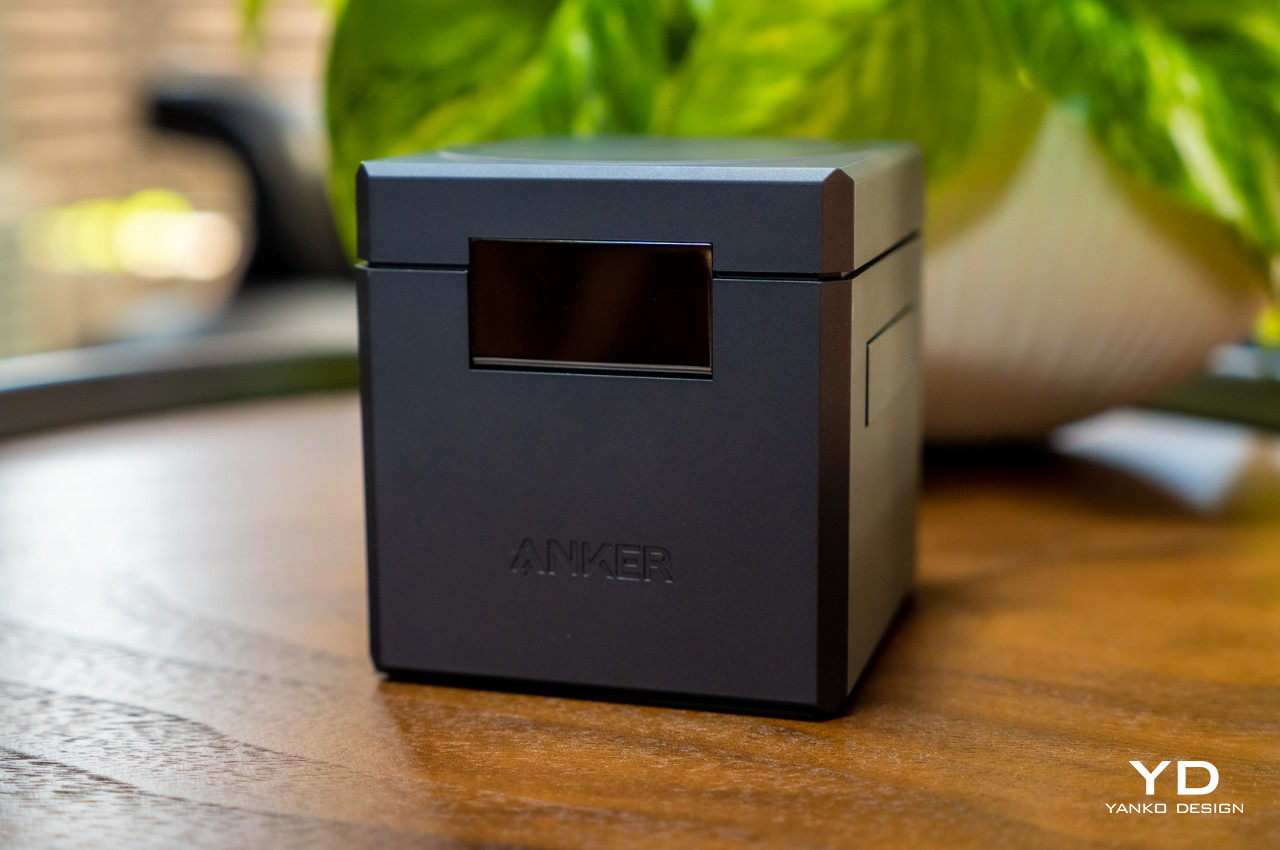